Because of the mayor’s recent reinstatement of the mask mandate in Columbus, we have made the difficult decision to cancel this event. Stay tuned for information on future events – we very much look forward to getting back to in-person events as the situation allows.

Join us as we discuss habits of leadership excellence with David Karam, Chairman and CEO of Sbarro, a leading Italian quick service restaurant company and the former President of Wendy’s International. 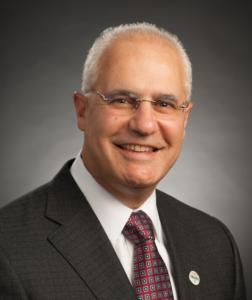 Before joining Sbarro as Chairman & CEO in 2012-2013, David was President of Wendy’s International from 2008to 2011. Under his leadership the company completed a successful turnaround, becoming the second largest hamburger chain in the U.S., surpassing Burger King. For his efforts David was inducted into the Wendy’s Hall of Fame in 2011.

Prior to joining Wendy’s, David was president of Cedar Enterprises, one of the largest franchisees in the Wendy’s system. While president the company was awarded the R. David Thomas Founders Award, and the Diamond Award for National Marketer of the Year, among numerous other recognitions. David joined Cedar in 1986 as Vice President of Finance before being promoted to President in 1989. Previously he served as senior auditor for Touche & Ross from 1982 to 1986. David is a CPA and holds a B.S. in Accounting from OSU and is a graduate of the Owner President Management program at Harvard University’s Graduate School of Business Administration. He serves on the boards of Henny Penny Corporation, St. Jude Children’s Research Hospital and the Pontifical College Josephinum.