> Wealth Notes > Inform > Where Are Potential Opportunities as the Market Moves Higher?

Where Are Potential Opportunities as the Market Moves Higher?

We can hardly believe it ourselves, but many broad market indexes are currently within spitting distance of breakeven for the year, with individual sectors such as health care and technology now reflecting positive returns for calendar year 2020. As markets move higher (and more expensive), where are the best potential future opportunities? In this issue of WealthNotes, we highlight two areas of the stock market:  U.S. small company stocks and foreign stocks.

Small company stocks got hit harder than large company stocks during the March market plunge, and up until recently, have been coming back at a slower pace. Down more and up less means the scoreboard reflects a losing point tally for small companies, but valuations support the idea that small caps could stage a late game rally. 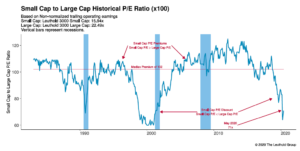 Another area which got hit harder than U.S. stocks in March and has come back at a slower pace (until recently) has been foreign stocks. As shown in the chart below, since the beginning of May, foreign stocks have actually outperformed U.S. stocks with the magnitude of that outperformance increasing the first few days of June.

Foreign stocks have been “cheaper” than U.S. stocks for a while, but according to a number of research firms we work with, foreign stocks could have an important tailwind in the weeks and months ahead – a weaker U.S. dollar.

Why does a weaker dollar help international stock returns? Let’s give a simple example. If a company in Europe makes all of its revenue (and returns) in Euros, that’s great, but here in the U.S. we don’t care about Euros – we want U.S Dollars! That means for U.S. investors, Euros effectively have to be converted into U.S. dollars. If the dollar is weakening (i.e., getting cheaper), that means the Euros are able to buy MORE dollars, which in turns means a higher return for U.S. dollar-based investors.

It’s been an interesting year, and we will keep sharing our thoughts as things move forward. Have a great weekend!

Check out this article's companion entitled, The Little Things Can Change Your Life.