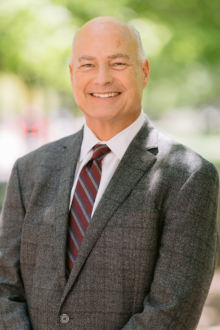 Mark is Co-Founder and Chairman of The Joseph Group (“TJG”). He continues to foster relationships with long-time clients, but spends most of his time telling the TJG “story” to persons and businesses that have a need for our services.

Mark’s favorite TJG value is TEAMWORK. Mark played football in high school and college and came to appreciate the way each player on a football team has a role to fill. The success of the team depends on each player meeting the responsibilities of their role to best of their abilities. Mark attributes the success of TJG to the way his “teammates” understand TEAMWORK in the context of serving clients.

Mark received his undergraduate degree in Economics from Ohio Northern University where he was the student body president and, as noted above, a member of the football team. He received his law degree from Rutgers University and completed graduate coursework in Economics at the University of Pennsylvania’s Wharton School. Prior to co-founding The Joseph Group, Mark practiced law as a partner at the Bricker & Eckler law firm in Columbus. Mark is licensed by the Ohio Department of Commerce – Division of Securities as an Investment Advisor Representative.

In 2011 Mark was appointed by then Governor John Kasich to serve as an Investment and Securities Expert on the Ohio Bureau of Workers’ Compensation Board of Directors. Mark was subsequently reappointed for additional terms by Governor Kasich and was most recently reappointed to the Board by Governor Mike DeWine. Mark’s BWC Board responsibilities include serving as Chair of the Board’s Investment Committee and Vice-Chair of the Board.

Mark has served on the Board of Trustees of Ohio Northern University for 31 years where he has served in various leadership roles and currently Chairs the Board’s Investment Committee.

Finally, for the past 25 years Mark has served on the Board of Trustees of The Wesley Communities, a United Methodist Church affiliated organization that operates residential/health related campuses for seniors in Clintonville, Reynoldsburg and New Albany. He is the current Board Chair.

Mark is married to his college sweetheart, Laurie. Mark and Laurie have two sons; Grant (and wife Chelsea) live in Atlanta, and Joe lives in Cincinnati. Mark and Laurie are members of Bexley United Methodist Church. Mark enjoys cooking, exercising, and working and relaxing on his 40 acre get-away property in Hocking County.