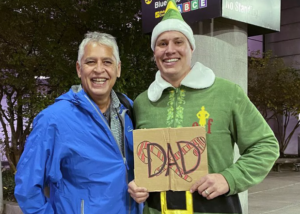 Christmas movies airing each night are one of the many highlights this time of year. “It’s a Wonderful Life,” “Frosty the Snowman,” “A Christmas Story,” “How the Grinch Stole Christmas” and “Home Alone” are a few of our favorites. And how can I forget “Die Hard?” 😊 But the favorite in my family is “Elf.”

If you haven’t seen “Elf,” immediately stop reading this article and go watch it. Audiences young and old absolutely love it and there are countless lines from the movie that are often repeated, particularly in my house. “You stink. You smell like beef and cheese. You don’t smell like Santa.” Or, “We elves try to stick to the four main food groups: Candy, candy canes, candy corns and syrup.” (I could write a ton more, but I have a character limit.)

I give all this background to share an inspirational real-life “Elf” story about a 43-year old man from Maine named Doug Henning. Doug was adopted as a baby and just like the movie “Elf,” his father didn’t know about him. Through the website Ancestry.com, Doug met a few biological cousins who then helped him find his father. The two had a few calls and “Zooms” but had never met in person until his father flew to Boston for Thanksgiving.

A week before Thanksgiving, Doug happened to watch the movie “Elf” and got an idea…to dress up like Buddy the Elf from the movie and greet his father with the song Buddy sings (and makes up  on the spot) when he sees his father… “I’m here with my Dad. And we never met, and he wants me to sing him a song!” While Doug’s Dad had never seen the movie, he still enjoyed the greeting and Doug shared “When he came out of the airport, he probably thought I was a lunatic. It was a really good way to break the ice.” If gaining a son wasn’t exciting enough, Doug also has an 11-year-old daughter so his biological father also met his first grandchild.

What an exciting and inspirational story during this unique holiday season. Season’s greetings, everybody!

Watch the video of this real life “Elf” greeting his dad here. 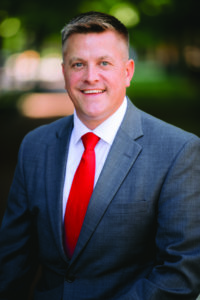 This WealthNotes article was written by Tim Petska, Client Advisor and Manager of Engagement Services

Check out this article's companion entitled, Enjoy the Froth – But Be Careful.