Every Man A Hero

“Greater love hath no man but that he lay down his life for his friends.”

These words, spoken by Jesus Christ 2000 years ago, rang with poignant truth 75 years ago when on June 6, 1944, 150,000 American, British and Canadian troops landed on the shores of northern France to help liberate that country and all of Europe from Nazi Germany.  In this issue of Wealth Notes, we are proud to share the story of Ray Lambert, a 23-year-old country boy from Alabama, who was an Army medic on one of the many boats that brought the troops to shore. 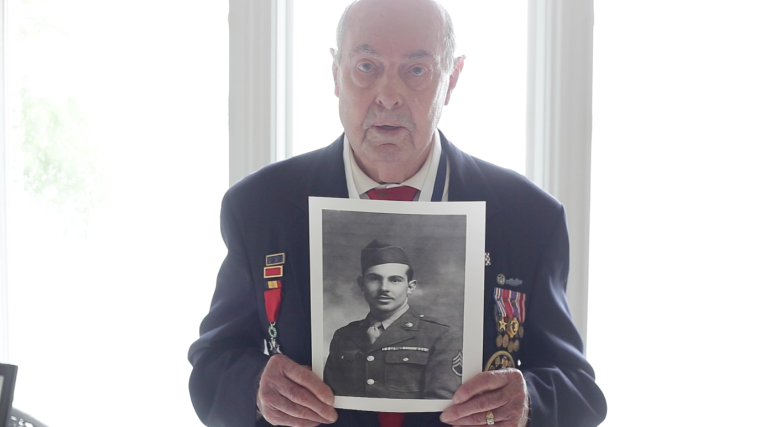 Ray Lambert holding a service picture of himself. (Source: www.thepilot.com)

“It was very crowded and cold and guys were seasick.  As our boat got close enough to the beach, we could see lots of our fellow soldiers already lying dead on the beach.  Lambert took a bullet through the elbow just as his landing crafts’ ramp opened.  But he didn’t stop as a man to his right had all of his equipment on and was obviously drowning.  “That was the first person I helped.”  Lambert would continue to help guys all through the day.  He kept going in spite of that elbow wound and soon thereafter, shrapnel that tore through his thigh.  Ray recalled that while he was working to drag one soldier to safety behind a rock, two more were pinned under the ramp of the boar bringing in more Americans.  That’s when I asked God to give me another chance to save some guys’ lives.  Miraculously, the ramp suddenly lifted and Lambert was able to help free them both – in the process his own back was broken.  He dragged himself ashore, looking down the beach before losing consciousness.  Lambert was later credited with saving the lives of 15 soldiers that day.  Sadly, 2500 did not live through the day.

Now 98, Ray says that even at that time the soldiers all understood that this Normandy invasion was pivotal to winning the war.  “We knew that this was a do or die situation.”  He keeps pictures and awards in the front room of his North Carolina home but said that he doesn’t need objects to help him remember.  “There is hardly a day goes by that I haven’t thought of some soldier or some incident that happened.”

Lambert has gone back to Omaha Beach several times since that day 75 years ago – and the rock where his men took shelter has been named Ray’s Rock.  He’s been reluctant to share his story, until now.  He’s written a book, Every Man a Hero, that describes that day.  He wanted the focus to be on his fellow soldiers.  “It wasn’t me that was a great hero.  I’m not.  I’m just a veteran.”

We join millions of people around the world in thanking this veteran and all of the other veterans that gave so much that day, that we all might have the freedom we enjoy.

God bless you Ray and God Bless all of your fellow soldiers that fought so bravely 75 years ago.