> Wealth Notes > Inspire > Integrity: The Courage to Meet the Demands of Reality

Integrity: The Courage to Meet the Demands of Reality

I (Matt) recently read Dr. Henry Cloud’s book entitled, Integrity: The Courage to Meet the Demands of Reality.  Great book.  I’ll share one story from it in this issue of WealthNotes and another story from it next week. 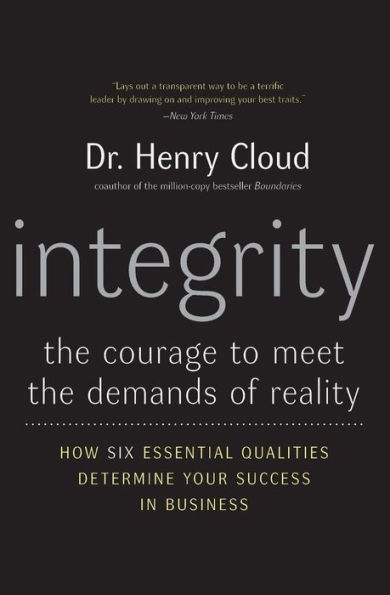 Cloud, a psychologist, shares that one client he counseled was a surgeon but had chosen that profession only because his father and grandfather were surgeons.  The family script was set: he would do what they had done.  And he did, for a while.  Because he was so smart, he could do it well enough, even though his real passion and giftedness were in the arts.  But, because his identity was so tied to what his family thought he should be, he did not fully embrace who he really was.  That is until he began making small “mindless” errors that resulted in some malpractice suits.  These mistakes had little do with anything other than not being fully engaged in his work.  He was there physically but not there emotionally; his heart was not in it.  Before long, the hospital that his grandfather had begun decided to move him out.  His father, still alive at the time, was dismayed, as he was failing in following his and his father’s footsteps.

But this young surgeon knew what he had to do.  He left the practice of medicine, moved to a different city and started his career over.  He got involved in the arts, where he was truly gifted and for which he had great passion.  And it was as if he had discovered his real self for the first time.  He was fully present, fully engaged and operating from the center of his being.

Cloud reminds us that for that to happen, all of us have to be in touch with who we really are and not trying to be someone we’re not.   It takes integrity to not succumb to other people’s expectations.  There’s a certain strength and courage required to stand up to those pressures and say, “that’s not me.”  Usually, this takes time and is not without conflict and struggle as most of us must experiment and take risks and be willing to fail.  If we never step out of our comfort zone, we may never find our true passion.

Cloud even relates this kind of integrity to humility, the virtue we discussed last week.  These are people who are learning what they are good and not good at – at what they are passionate and not passionate about.  Remember, humility is not self-deprecating, but simply being real and honest about ourselves – our strengths, weaknesses, etc.  When someone is who he or she really is and does not act as if they are more or different than that, they are being humble.  And out of that kind of humility comes a secure self-identity and a positive life.  (taken from chapter 9 of the book).

Living a great life requires brutal self-awareness and a willingness to do the hard work of identifying one’s true gifts and interests and pursuing those, rather than pursuing others’ expectations.  It holds true for us as older adults and it also holds true for our kids and grandkids, so let’s make sure we’re not like the father and the grandfather in the story above – forcing our own expectations on a child.

Living a great life – one of passion, purpose, and joy.  Work at it – it’s so worth it!

Source:  Cloud, Henry.  Integrity: The Courage to Meet the Demands of Reality.  HarperCollins, 2006.