> Wealth Notes > Inspire > Perseverance and the Statue of Liberty

Perseverance and the Statue of Liberty 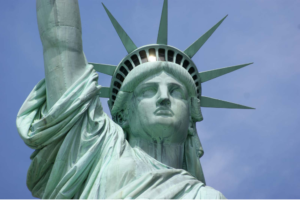 We’re heading into this Fourth of July weekend with a history lesson on the Statue of Liberty and a story of perseverance by an American craftsman.

The Statue of Liberty, as most of you probably know, was gifted to the United States by France, in honor of the U.S. centennial of independence. Built in France, the statue made it to its new home on Bedloe Island in 1886. Assembling the statue included a metal technique called repousse´. This involved molding 300 copper sheets, each the thickness of a silver dollar, by hammering them onto the statue’s wooden framework. The completed statue was unveiled on October 28, 1886.

As you might imagine, the Statue of Liberty frequently needs repairs. In the 1920s, the statue was under the jurisdiction of the War Department, so when repairs were needed in 1928, the Army hired 23-year-old Kenneth Lynch, a metal craftsman who owned an ornamental metal shop in New York City.

Lynch sealed leaks and replaced copper plates, sometimes hanging hundreds of feet in the air. Lynch was a craftsman and had mastered the art of repousse´, and worked with his own special tools from his workshop. Then, while doing repairs in the basement, he discovered several dusty wooden chests. Inside were more than 35 repousse´ tools – the original tools used by the Parisian builders. Lynch put the tools to work. When the work was complete, the Army pointed out that his contract stated that he had to leave the premises “broom clean” and demanded Lynch remove the tools, despite him insisting they were priceless historic artifacts.

Lynch reluctantly took the tools and carefully stored them. Convinced that the tools should be at the Statue, Lynch wrote the Secretary of War, then his congressman, the Smithsonian, and many others. No one seemed interested. Lynch became well known for his skill and word of the artifacts spread. Collectors and antique dealers offered money, but Lynch refused every offer.

For over 50 years, Lynch wrote letters, trying to return the tools. When the Statue was turned over the National Park Service, he tried again, with no luck. Finally, in 1981, Lynch saw a new superintendent, David L. Moffitt, was now in charge. Lynch contacted Moffitt, who immediately understood the value of the tools, and placed them in the Statue’s museum. Moffitt also declared April 3, 1982 Kenneth Lynch Day, inviting the public to watch Lynch and his craftsmen hammer out a large copper sheet with the historic tools.

Kenneth Lynch devoted so much time and effort, firm in his belief that the tools were part of history and belonged with the Statue. He persevered through 50 years, and finally found success. What a lesson for our lives. Perseverance is so vital to success. It doesn’t matter what your goal is or how long it take to reach, don’t stop trying.

Sources: His Perseverance Paid Off in a Gift to the American People, Guideposts, June 29, 2020; Statue of Liberty, National Park Service, nps.gov

Check out this article's companion entitled, Is Your Estate Plan Set Up for Success?.