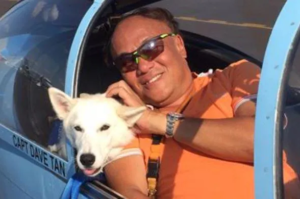 I love animals – my current menagerie includes a dog and three cats, all rescues. So I can’t pass up a good news story about people helping rescue animals.

There is a great non-profit organization called Pilots N Paws that brings together pilots and animal shelters that need to transport pets to new forever homes.

One of those pilots, David Tan of Middleton, Wisconsin, spent 40 years as a pilot in the military, then in professional and private jobs. Now the passengers in his two-person plane are mostly rescue dogs. Since 2012, he’s flown more than 360 dogs to safety as well as 23 cats, a potbelly pig and even a bat that he helped deliver to a rescue preserve in Ohio.

Tan is one of 6,000 volunteer pilots who donate their time, planes and fuel to transport pets in desperate need of help. Typically, a rescue will require multiple pilots who fly legs of around 250 miles before handing the animal off to another plane.

“There are just some terrible stories out there about how cruel people can be to animals, especially down south; the abandonments are horrible,” Tan said in an interview. “A family would just leave them. So that kind of gets me. I feel good when at least … I can contribute toward where they go.”

His job is usually to transport the animals between the airports, but sometimes he’s lucky enough to introduce them to their new forever families. “You sort of say, ‘Hope you have a great rest of your life,’ you know?” he says. “‘Hope these people love you forever.’”

Sometimes the families will hand give him money for his efforts but he passes that on to the rescues, to help pay for medical costs associated with the animals they save. “They’re always short, especially when it comes to medical care for the animals,” Tan said. “It just costs so much nowadays.”

Flying requires constant practice so pilots need a lot of flying time to maintain their skill set. Tan believes that his work rescuing dogs helps keep him in tip-top shape.

“If you fly, it’s a perishable skill and you must keep current,” he says. “So rather than take a flight and go somewhere for what we call the proverbial $200 hamburger, I’d rather be flying dogs.”

What a generous thing to donate time and money to help rescue animals get home, and how amazing that there are 6,000 pilots willing to do this! If you love animals, you don’t need a pilot’s license to help. Check out what your local shelter might need – most have ‘wish lists’ on their website, or volunteer some time and help a rescue find a new home.

Check out this article's companion entitled, Thoughts From The Ohio Institutional Investment Forum.