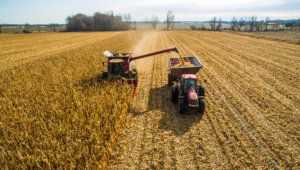 It’s amazing what a group of people can accomplish when they’re all working toward a common goal. Back in 2015, the small community of Galva, Illinois pulled together for what came to be known as The Amazing Harvest.

Local farmer Carl Bates, 55, was diagnosed with a “fast, aggressive cancer.” When the word spread about the likeable farmer’s terminal illness, about 40 people donated trucks and labor and harvested Bates’ 450 acres of corn in 10 hours on September 25, 2015. It’s typical to harvest about 80 acres a day. Carl’s cousin Dan came up with the idea, and people throughout the community volunteered.

The harvest became a viral sensation, but most importantly, this community act of immense compassion gave Carl and his family space to focus on the last few months of his life.

At the time, the story was picked up by major news outlets and ultimately broadcast internationally. It’s back in the news today because Carl’s widow Pam Bates just published a book, The Most Amazing Harvest, about her husband and the story of the harvest.

After Carl’s death, Pam felt called to share the story, but didn’t think she could do it; she wasn’t a writer. She enlisted the help of her twin sister Paula Patty, who had been by her side throughout the journey. The book is a compilation of stories about Carl Bates, and how his story touched the hearts of people around the world. Learn more about the story and Pam’s book at TheMostAmazingHarvest.com.

Check out this article's companion entitled, The 2020 Tax Holiday and What to Do About It.