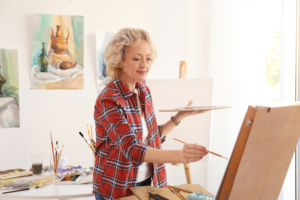 You’ve probably heard the saying “it’s never too late to learn something new,” but actually diving into new hobbies or trying to learn new skills as adult can seem challenging. According to Tom Vanderbilt, author of Beginnings, one thing that often stands between us and learning a new skill is mindset, and embracing a “beginner’s mindset” can help.

Kids are quick learners, and they’re constantly encouraged to try new things. They’re especially good at picking up patterns – understanding that certain actions will lead to certain kinds of events, without needing big explanations of why. After the age of 12, however, we lose some of that capacity to absorb new information.

According to Tom, while adults may not absorb new skills quite as readily as a child, adults have “neuroplasticity” – the ability for the brain to rewire itself in response to new challenges.

While watching his young daughter at one of her many practices he realized he should also be challenging himself to learn new things. He decided to spend one year pursing new skills – chess, singing, drawing, juggling and surfing – and the point was not to become a pro-surfer or bestselling singer, but rather to immerse himself in the pleasure of the learning process. He also spent time researching learning better as an adult and found some basic principles that anyone can use to make learning more effective.

Learn from your mistakes. Rather than repeating the same actions over and over, be more focused and analytical, thinking about what you did right and what you did wrong – what psychologists call deliberate practice. While learning chess, Tom discovered you could put in countless hours playing online games, but it was more effective to study strategies of the masters or discuss losses with a chess teacher.

Make sure that your practice is varied. This is called repetition without repetition and it forces your brain’s learned patterns to become more flexible, allowing you to cope with unpredictable difficulties. When juggling, for example, it helped Tom to switch the objects, or to change how high to throw them.

Teach others. We often learn best when we know that we will have to teach others the same skill. It’s not clear why this is, but that expectation seems to increase people’s interest and curiosity, which gets the brain’s attention and helps ensure that it lays down stronger memories. So consider sharing your new hobby or skill with a friend or family member!

When starting something new, pick something that is easy to integrate into your existing lifestyle something that doesn’t seem like a major time investment. Tom found that his drawing, for example, had improved significantly in the time that it would normally take to binge-watch a TV series.

In addition to just having fun, or challenging yourself, there are definite benefits to embracing any new skill – including some long-term brain changes that could offset some of the mental decline that often comes with ageing. One study of adults – aged 58 to 86 – who pursed courses in subjects like Spanish, music, composition and painting found the subjects not only made good progress in the individual skills, but also showed improvement on general cognitive tests – matching the performance of adults who were 30 years younger.

The best benefits seemed to come from trying out multiple skills, rather than focusing exclusively on one particular thing, so don’t hesitate to try different things. A lifelong pursuit of different interests may even increase your creativity.

And, finally, research has shown that intellectual humility – the capacity to recognize the limits of our knowledge – can improve our thinking and decision making.

So go for it! Pick a new hobby or try something you’ve always wanted to try. Whatever skill you want to learn, try cultivating that “beginners’ mindset,” and just enjoy the experience.

Source: Robson, David. How a ‘beginners’ mindset’ can help you learn anything. BBC.com

Check out this article's companion entitled, How Young is Too Young?.