> Wealth Notes > Inspire > The ‘Christmas Star’ on the Winter Solstice

The ‘Christmas Star’ on the Winter Solstice 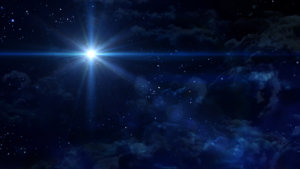 Monday, December 21, 2020 is the winter solstice in the Northern Hemisphere, and this year’s solstice includes a rare sight, a phenomenon dubbed the “Christmas Star.”

In the early evening of this solstice, the planets Jupiter and Saturn will align in their orbits in what NASA refers to as a “great conjunction.” The glow of the two planets will combine to create a brilliant light in the sky.

While this planetary conjunction actually happens every 20 years, the planets have not been this close to each other and visible in 800 years. That means the last time these planets were this bright in the sky was the Middle Ages – 1226. And it won’t happen again until 2080.

The best way to see this is between dusk and about 20 minutes after dark. Look at the low southwestern horizon right around sunset, weather permitting.

Amy Oliver, with the Harvard-Smithsonian Center for Astrophysics called this conjunction “a unique holiday gift to the world.” Hopefully it will help spread hope and comfort during this unusual holiday season.

If you’re in Central Ohio, the forecast for Monday evening is partly cloudy, meaning you might be able to see this rare occurrence. If you can, take a moment to step outside Monday around sunset.

The winter solstice marks the onset of winter, and is the shortest day of the year. So, while there are some long, dark, cold times still to come, the solstice means the days will start getting longer, and spring will arrive again.

This article was written by Michelle O’Brien, Manager of Marketing

Source: See the Miraculous “Christmas Star” on the Winter Solstice This Year, Guideposts.com