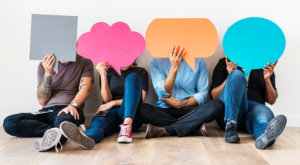 I may be dating myself by starting with a reference to Sally Field’s 1985 Oscar acceptance speech, which has been widely quoted and misquoted since it happened. Sally’s speech reflected her gratitude for being recognized, and in it she says she wanted more than anything to have the respect of her peers. She wanted people to like her.

A recent study shows that people we interact with usually come away from interactions thinking positively about us – they like us. The researchers say we spend about half of our waking hours in conversation. Frequently we spend time thinking about those conversations later – hours later, or even days or weeks later, replaying these interactions in our head to consider advice or to just reminisce (I was very happy to read this, now I know it’s not just me!). But while we do think about these interactions, we mostly don’t consider that the other person is doing the same thing.

Getting back – sort of – to Sally Field, researchers also identified a “Liking Gap.” This is the perception that if our conversational partners think about us at all, they might not have a positive assessment of us. Maybe they think we didn’t come off as smart, or funny, or have other “markers of likeability.” But, according to the study, that’s not true – most people think very positively about conversation partners after a chat. The authors wrote, “People systematically underestimated how much their partner liked them and enjoyed their company.”

Whew, so much insecurity! Wondering if friends, coworkers and others think about our interactions and assuming those people might think negatively of us.

All of this should make us think about the impact we have on people and should inspire us to let people know how we’re feeling after an interaction. Take a minute today to let someone know they inspired you. Or thank them for being who they are and how they make your life better. Maybe even take a minute and write a letter! Your words mean a lot, and remember that people like you, they really, really like you.

Source: Lebowitz Rossi, Holly. People Like You More Than You Think! Guideposts.com