3 Questions About the Stock Market

After one of the strongest starts to a year ever in 2018, the stock market has quickly corrected over the last few days, reversing January’s gains.  The market correction, including the largest point loss for the Dow ever on Monday, has been fast and furious but in a big picture context, it puts the market back to where it was in late December.

We believe one of the factors exacerbating the decline is computerized trading related to market volatility.  Heading into this year, volatility by many measures was at all-time record lows.  A number of computerized strategies popular with Wall Street involved using leverage to buy additional stock in an attempt to capitalize on low volatility.  In the last week, volatility has reversed higher in a big way.  The chart below looks at the VIX, a popular measure of volatility based on the options market.  A few short weeks ago, the VIX was below 10 and today is above 50.  What’s the point?  We believe complex computer-based trading strategies which were “buying” based on low volatility are now being forced to sell as volatility is moving higher.  The computerized selling appears to be creating extremes in market movements. 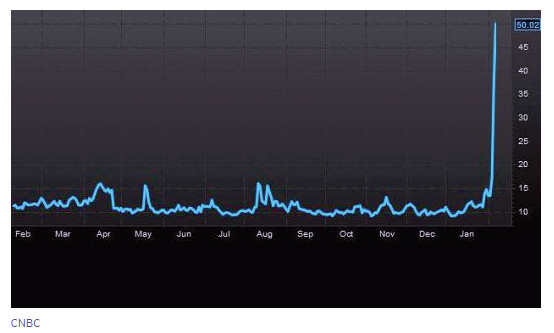 2. Is Something Wrong With The Economy?

In short, no and there was no big data release which would correlate with the recent market decline.  Regular attendees of our monthly Portfolio at Panera events know we often look at various “cross-market indicators” to gauge the health of the broader economy.  Even with the recent decline, “credit spreads” which are a gauge of the risk of bankruptcy for indebted companies have barely moved, indicating stability in the banking system.  We also have been paying attention to action in transportation stocks and industrial metals like copper which are widely used in construction and industrial applications.  Continued stability in those areas point to economic strength.

If anything, some may say the economy is running TOO hot.  Yesterday the Institute for Supply Management released their January survey results for the services sector of the economy.  The number came in at 59.9, above expectations and the highest level since 2005 indicating continued health in the service sector of the economy.  With multiple data points showing economic strength, it does put pressure on inflation and interest rates but does NOT support the idea of a looming recession.

3. What Are We Doing About It?

A market environment where prices are moving in a different direction than fundamentals signals opportunity.  We do not plan to rush in to buy as we want to get a sense of how big the current “volatility unwind” could be, but we are looking at key market levels based on moving averages and technical targets where we can add exposure to stocks in client accounts where appropriate.

Part of our job is to avoid getting caught up in euphoria when markets are soaring and fear when markets are falling.  We weren’t necessarily expecting to get both extremes in the span of two weeks!

Our team welcomes your comments and questions as we seek to manage risk as well as opportunity as we focus on meeting the goals and objectives of our clients.