A Flat Market, But Busy Year

As this note is being written on the last day of the year, the Dow is down over 100 points, capping off a year of flat to negative returns for major stocks indexes in 2015.

2. Breadth WITHIN markets was also weak. The chart below (data as of December 23rd) is perhaps our most talked about chart with clients over the last few months. As of last week, the S&P 500 index was essentially flat for the year but breaking down the performance of individual stocks, flat is a bit of a misnomer. The top 10 stocks in the S&P 500 performed extremely well, largely due to what we are calling FANG – Facebook, Amazon, Netflix, and Google. However, if you look at the other 490 stocks in the S&P 500, those stocks were down an average of -5%. With “the market” carried by only a handful of names, it is no wonder that 2015 was such a difficult year for diversified investors. 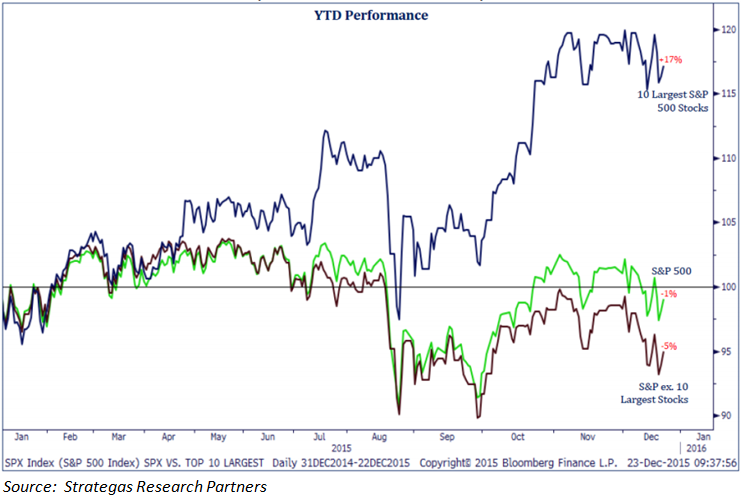 3.Opportunities for 2016 May Exist in “Income” Oriented Investments. As we look forward into 2016, we are cognizant that income oriented investments especially took a beating over the last year and could be an attractive area to “buy low.” For example, high yield bonds fell in the last half of the year and the Morningstar High Yield Bond Index will likely finish 2015 down about -4%. However, when we look across the high yield market, we are seeing bonds with average interest rates of 7 to 9%.

We also saw weak performance from dividend paying stocks as “value” stocks (where you tend to see more dividend payers) underperformed the broader market. Lower prices in high quality, blue chip, dividend paying companies could present an opportunity to increase the income being paid by various investments in a portfolio.

The silver lining of a difficult market is how it creates opportunities for the future. 2015 was a difficult year, but as we think about future prospects, we are smiling as we flip the page on the calendar and toast the arrival of 2016.

Check out this article's companion entitled, Leading in the Second Half of Life.