> Wealth Notes > Inform > A Quick Recap of Portfolios at Panera

A Quick Recap of Portfolios at Panera

Earlier this week we held our first live Portfolios at Panera event in many months. Alex and I had the opportunity to speak to a capacity crowd (it was a bit cozy in the room) and have a lively conversation on markets. Here is summary of key discussion items:

On Wednesday, the day after the P at P event, the Federal Reserve announced their widely anticipated 0.25% hike of the Fed Funds rate to a target range of 0.25% – 0.50%. Now that rate hikes have started, where do things go from here? The Fed’s “dot plots,” which is a tool the Fed uses to show what Fed governors are thinking about the future, showed a total of seven rate hikes projected in 2022. In Fed Chair Powell’s press conference, he acknowledged the seriousness of the inflation situation and suggested with the economy remaining strong, it would take a lot for the Fed to divert from it’s tightening path. So far, the market seems to agree. The chart below shows the number of rate hikes priced in by Fed Funds futures. Like the dot plots, the market is forecasting Wednesday’s move to be the first of seven hikes this year. 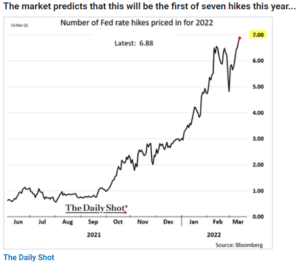 With the Fed hiking short term rates, a big item of discussion at the Portfolios at Panera event was the path of longer-term interest rates (which are influenced more by markets than the Fed) and whether we may see a recession in 2022. Last week’s Wealthnotes discussed three recession red alert signs and we reiterated those at the event. Here is a summary of where we stand today based on data from the Wall Street Journal Market Data Center:

When it comes to assessing the risk of rising oil prices to the economy, we shared the table below from Vanguard which seeks to show different scenarios based on oil price levels and the impact on growth. The first line of the table below shows crude oil price ranges and the third line shows the likely impact on economic growth. Although oil prices temporarily topped $130 a week or so ago, today’s price level of $103 falls within Scenario 1 which is still consistent with above trend economic growth and no recession.

As part of the Portfolios at Your Place discussion, I noted the fact that investor emotions were high with the war in Ukraine and when emotions are high, people want to act. I posed a hypothetical situation to the group. I asked, “if you were making a decision a week ago to buy either commodities, bonds, U.S. stocks, or foreign stocks, which would you do?” I then told them we would measure the success of the move based on 1 week performance. One brave soul in the group raised their hand to say they would buy foreign stocks and they were right. As of the date of the Portfolios at Panera event, the 1 week performance of all of the other asset categories were negative (with commodities being the worst, down -8%) except for foreign stocks (as measured by the MSCI EAFE) which were up 3%. The point of the exercise was to reiterate something we have seen in markets countless times over the years – the emotional market decision is often the wrong one. 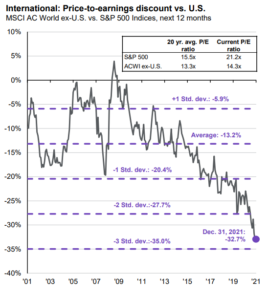 Source: JPMorgan Guide to the Markets

Second, as shown in the chart below, the value of the U.S. dollar sends to rise in anticipation of the Fed hiking rates, but falls as the rate hikes actually occur.  If history repeats itself, the dollar could decline, which would be supportive of foreign assets. 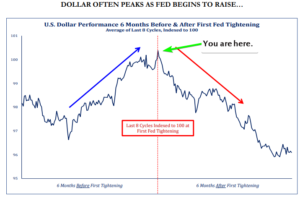 Tuesday’s Portfolios at Panera event was terrific. We believe the best part is the conversations and hearing thoughts and questions from other friends and clients. We are excited to get back to live events and we look forward to seeing as many of you as possible at our Portfolios and Pints event in April (register here). I’m sure there will be plenty to talk about.

Check out this article's companion entitled, Walking and Thinking - What's the Connection?.