A “Tail” of Two Markets

The S&P 500 rebounded +7.9% in January after a large drawdown of -9.2% in December. Those are some big numbers for one month periods, but neither should really be considered “normal.” 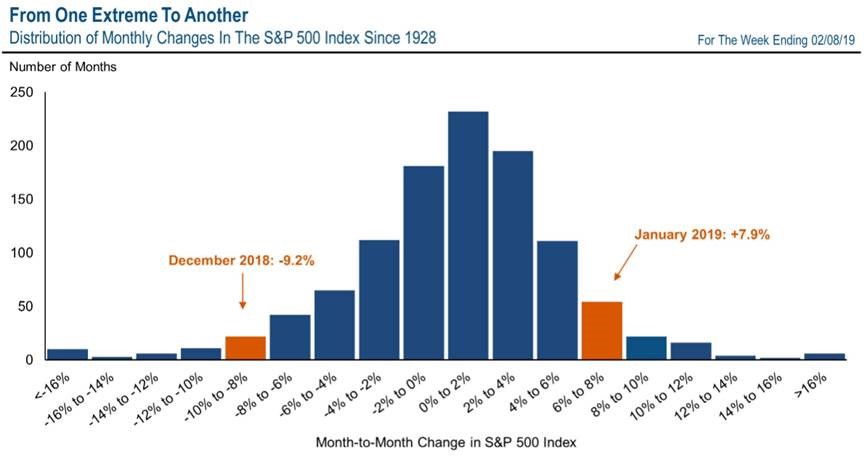 The chart from Payden & Rygel is a nice visual of the historical monthly returns dating back to 1928. Since 1928, most of the observed monthly returns have been clustered between -2% and +4%, far more contained than the large negative and positive returns we experienced in December and January, respectively.

Why are we pointing this out? For those who watch their accounts on a daily basis (something we would discourage everyone from doing), large market swings can be an emotional experience in either direction – large drawdowns can feel like the world is ending (sell, sell, sell!) and large upswings can feel like things are back to the races (buy, buy, buy!). Sometimes, emotions beat logic in investing, and market movements have nothing to do with changes to fundamentals. In fact, we would argue January’s large rebound was the market’s positive emotional reaction to December’s damage caused by negative emotions. Neither environment represented a large shift in fundamentals.

We believe aligning our clients’ wealth with their different goals and objectives is a way to help block out the emotional side of markets. If a client’s wealth is properly allocated amongst different strategies designed to help them meet different objectives, emotions shouldn’t matter in either environment, positive or negative. The big picture question should always be, “am I on track?”