Christmas may have come early for investors as Pfizer/BioNTech put out its vaccine data earlier than expected. According to Bloomberg, “the shot prevented more than 90% of symptomatic infections in the trial of tens of thousands of volunteers.” On a call with reporters, Anthony Fauci, Director of National Institute of Allergy and Infectious Diseases, said “with effectiveness for the first vaccines previously expected to be in a range of 60% to 70%, a rate of more than 90% is just extraordinary.” The news is huge and represents hope for a return to a “normal” economy. With production of the vaccine happening ASAP, early doses may begin to be available as soon as December with a ramp up through the first half of 2021. Many timelines indicate that by next summer, most of the population will have access to the vaccine.

From a broader market perspective, the shift in leadership is illustrated in the chart below from Monday, November 9th. Morningstar, a noted investment research firm, divides up the stock market into a tic-tac-toe board called the “Morningstar Style Box.” On the horizontal axis, stocks are grouped by Style – Value, Core, or Growth, while on the vertical access, stocks are grouped by Size – Large, Medium, or Small. As you can see from yesterday’s Style Box, Value outperformed Growth while Small outperformed Large. Looking at the extremes, Small Value stocks were up 7.96% while Large Growth stocks were down -1.22%. That’s a difference of over 9% in one day! 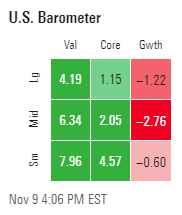 Why the differences in performance? Here are some key observations:

We believe the vaccine news has huge potential implications for markets and leadership moving forward. As shown below, in recent years, Large Cap Growth stocks have dominated the performance of Small Cap Value stocks to a degree not seen since the late 1990’s. The popping of the “internet bubble” after Y2K was a catalyst for performance to reverse and Small Value stocks outperformed Large Growth stocks through the early 2000’s. With a similar performance gap, we wonder if a vaccine could act as a similar catalyst for a leadership reversal. 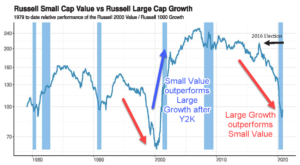 The Presidential Election was (and still is) a big deal, but for markets, we believe a vaccine has a more important impact. It won’t be a straight line, but if yesterday’s market action is any indication, financial market leadership could be changing in the weeks and months ahead. We will keep you informed as we look to make proactive shifts in the objective-based portfolios we manage for our clients.

Check out this article's companion entitled, A New Passion Shows the Beauty of the World Around Us.