A World Champion Poet Pursues A Career in Medicine 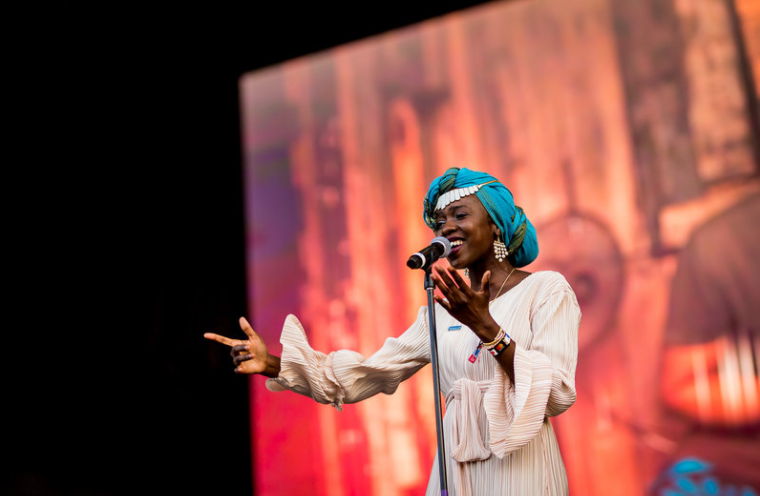 “Memories of my childhood live/between the rings of sand around my ankles/and the desert heat in my lungs. I still believe that nothing washes/worry from tired skin better than the Nile/and my grandma’s hands.

That’s an excerpt from “People Like Us,” a poem by 26-year-old Emtithal “Emi” Mahmoud, an internationally regarded poet known for her vivid language and dedication to uplifting others. As a global goodwill ambassador for the U.N. High Commissioner for Refugees, she’s taught poetry workshops in refugee camps from the Middle East to Africa.

And during these recent months of COVID-19, Mahmoud, who lives in New Haven, Conn., has been writing new poems, protesting for racial justice, and preparing to launch her new nonprofit organization, The Women’s Table. Named after a sculpture honoring the role of women at her alma mater Yale University, Mahmoud says her new initiative’s mission is to amplify the voices of marginalized groups all over the world. Pretty ambitious for a 26 year old, right?

Emi spent her early childhood years in Yemen, moving with her family to the United States through the visa lottery when she was 4. She has strong memories of Sudan’s terrifying violence, which she witnessed on a family trip back to her home country at age 7. While there, protests against the government’s shutdown of schools led to attacks on civilians. Mahmoud remembers hiding under a bed with four others and seeing her parents and relatives came home from the protest bloodied but defiant against the tyranny their nation was experiencing. Another line from “People Like Us,” reads: “I remember their shoe laces, scarlet footprints on the floor … fear is the coldest thing in the desert, and it burns you – bows you down to half your height and owns you.”

In school, science was an absolute that helped her make sense of a crazy world. At Yale, she crafted her own path of study, double-majoring in anthropology and molecular, cellular and developmental biology. “People comment that these are two very different things, and I say, I study people from the inside and from the outside.”

After seeing a fellow student perform onstage poetry for the first time, Mahmoud found a new way of expressing herself and began writing poetry to share the stories of her family in Sudan. She says performing her poetry on stage has given her courage and a way to carry on her Sudanese heritage. “I come from a place where the history is based on oral tradition, everything is passed down from person to person. That’s why that’s why I write about it so much…I don’t want to forget.”

Mahmoud also says that her poetry allows her to challenge people’s pre-conceived notions of her. “I’m young, a woman of color, an immigrant, a former refugee, and a Muslim. My poetry gives me power and helps change for others what power looks like.”

The success of one of her poems that shared the experiences of some of the Sudanese women in her extended family turned Mahmoud into an international public figure. Since then, she’s presented at the United Nations, joined White House round-table discussions, given TED Talks and spoken to audiences of thousands.

Although Mahmoud’s travel is currently on hold due to the COVID-19 pandemic, she hopes to merge her activism with medicine. She was a Global Health Fellow at Yale and spent a summer in college volunteering in Sudan’s refugee camp clinics. There, she saw up close the difficulties doctors face in a resource-strapped environment.

“As much as science speaks on its own, the language of science isn’t exactly the most inviting language, and that’s why poetry comes into the picture, I can’t imagine not spending the rest of my life trying to demystify and unmask all of these systems.”

What a remarkable young woman. What young person in your life needs encouragement from you to pursue their dreams and make an impact on the world Emi is living proof that each one of us can make a difference for good, regardless of our circumstances.

Greatness…it’s in each of us.

Check out this article's companion entitled, What is the Market Saying About Inflation?.