Beneath the Surface of a Market Hitting New Highs

Several months back when the health and economic impacts of COVID-19 were being digested by financial markets, I remember reading a report talking about how the combination of Federal Reserve stimulus and recovering earnings could lead the S&P 500 to hit a level of 3,400, a new all-time high, before the end of the year.  At the time, the S&P 500 was closer to 2,800 (well off of the March 23 low around 2,200) and the idea of another 25% rally with COVID impacts still being digested seemed far-fetched. However, as I type, the S&P 500 sits at 3,545 – a level even higher than the wildly optimistic prediction from a few months ago.

Looking beneath the surface, there are some interesting things we are observing within the stock market beyond simply a new high-water mark for popular indexes. There are two in particular we want to focus on today:

The Largest Stocks Within the S&P 500 Are Driving Performance

While the mainstream S&P 500 index (which is weighted by company size) has hit a new all-time high, the equally weighted S&P 500 has not and is still negative year-to-date. The chart below gives some context to as to why.  Each of the little lines in the chart represent one of the 500 stocks within the S&P 500 index. Grouping the stocks, here is what we can observe: 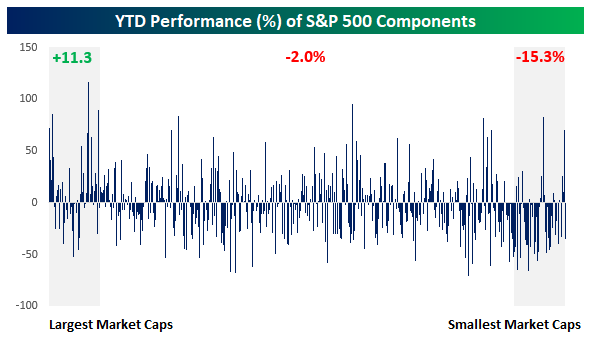 The chart shows the rally to new highs has not been as broad-based as what many investors might hope. It may also imply better valuation opportunities looking forward may exist in smaller companies, something that has our attention.

The Average Foreign Stock Has Outperformed the Average U.S. Stock

As much attention as U.S. stocks have received during the recovery, it’s important to recognize stocks outside of the U.S. have had strong performances as well. In fact, Jeffery Kleintop, Chief Global Strategist at Charles Schwab, says the outperformance of big U.S. stocks may be hiding an important leadership change underneath the surface – the average international stock has been outperforming the average U.S. stock.

What do we think is behind the recent change in leadership? In recent Portfolios at Your Place events, we have been talking about the importance of a weakening U.S. dollar. The chart below shows the value of the U.S. dollar compared with other currencies going back to 2017. As you can see, since April (which economists say was the low point of the recent recession) the U.S. dollar has weakened, giving a tail wind to the performance of assets which benefit from a weaker dollar, like foreign stocks. 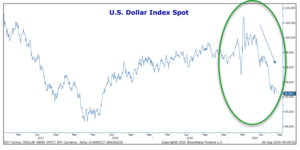 Whether you are swimming in the ocean or investing in financial markets, it’s always important to look beneath the surface!

Check out this article's companion entitled, Resources for Personal Growth.