Bond Math Has Changed – And That’s a Good Thing

Stocks are retesting their June lows but one of the factors which has made the market environment particularly challenging is bonds are down as well. Most often, when stocks are down, bonds will tend to cushion the blow, but with the Bloomberg Aggregate Bond Index down over -14% YTD, bonds haven’t been a cushion at all. With both stocks and bonds declining, 2022 (so far) is the worst period for a balanced (60% stocks/40% bonds) portfolio with data going back to 1976.

The silver lining to the decline in bonds is the math going forward makes it extremely unlikely the next nine months for bonds will be like the last nine months. We believe “bond math” is much more favorable for investors than it was at the start of the year, and it has important implications for portfolio construction and future opportunities for investors. Let’s discuss.

We like to visualize the relationship between interest rates and bond prices like two ends of a teeter-totter. When the first end, interest rates, goes up, the other end, bond prices, goes down.

Why does this happen? If an investor is holding a bond paying 1.5% and wants to sell it, but interest rates in the market for brand new bonds is 4.0%, the investor is not going to be able to sell their bond for full price. The investor will have to accept a lower price…the price which makes buyers indifferent between a brand-new bond paying 4% and the older 1.5% bond which is now trading at a discount.

The opposite is true if interest rates go down. Continuing our example, if the rates on new bonds were to decline from 4% to 3%, investors would be willing to pay a premium for older 4% bonds, meaning their prices would rise.

Where Are We Today?

The interest rate for the benchmark 10-year Treasury bond started 2022 at 1.52% and earlier this week, the rate crossed 4.0% intraday. Here is what that looks like on a YTD chart: 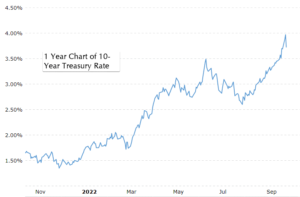 For further perspective, let’s look back a little further at a 10-year chart. 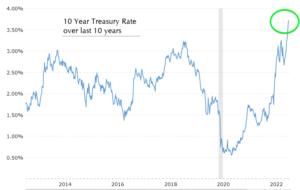 At close to 4%, the 10-year government bond is now paying the highest interest rate in over a decade!

A couple of weeks ago, JP Morgan put out a chart looking at the potential total return impact of a 1% rise or fall in interest rates.  There is a lot on the chart but there are two key things I want to point out: 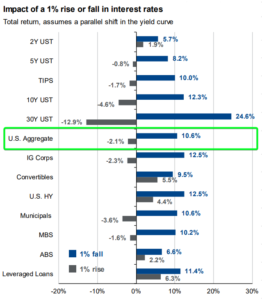 If you have read this far, congratulations, you now have an advanced degree in bond math! You may be asking, what are the portfolio implications? The big one we have been talking about here at The Joseph Group is that interest rates historically decline in a recession. If the economy did fall into a recession and if rates did decline like they do historically, bonds are positioned to once again provide a cushion to the portfolio.

At the risk of making this WealthNotes long, we wanted to include one more bonus chart. Long-time readers know one of the indicators we look at to track investor sentiment is the “Smart Money/Dumb Money” chart. The idea is to follow the so-called “smart money” commercial hedgers and insiders with longer time horizons but do the opposite of the so called “dumb money” emotional individual investors. When you see the behavior of the two groups move in opposite extremes, it can line up with important market turning points.

We’ve received the question a few times from clients, “What is the Smart Money/Dumb Money chart saying?” Today’s chart is below. It’s showing the “Smart Money” is reflecting optimism at an extreme level while the “Dumb Money” is reflecting pessimism at a historical extreme. With the caveat no one indicator is a perfect timing mechanism for the market, past opposite extremes have historically lined up with attractive intermediate/long-term buying opportunities for stocks. 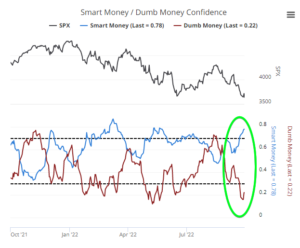