I (Matt) met Josh last Saturday, at the Devil’s Head Summit in Pike National Forest, just south of Denver.  I was in Denver visiting my daughter, son-in-law, and their four-month-old daughter, Madeline and I decided to do a climb early that morning.  Nearly 10,000 feet in elevation, Devil’s Head Summit is known as a nice climb with a great view once you reach the top.  That day there would be no nice view – it was cloudy, foggy and spitting snow.   But I loved it anyway.

Josh and I had seen each other during the climb up -taking breaks at the same points, etc.  But it wasn’t until we reached the summit that we introduced ourselves to each other.  I took a picture of him on his phone – he reciprocated with mine.  While resting before beginning the climb down, we started a casual conversation – but what started out as simple chit chat quickly became much more as Josh shared an inspiring story of resilience and perseverance. 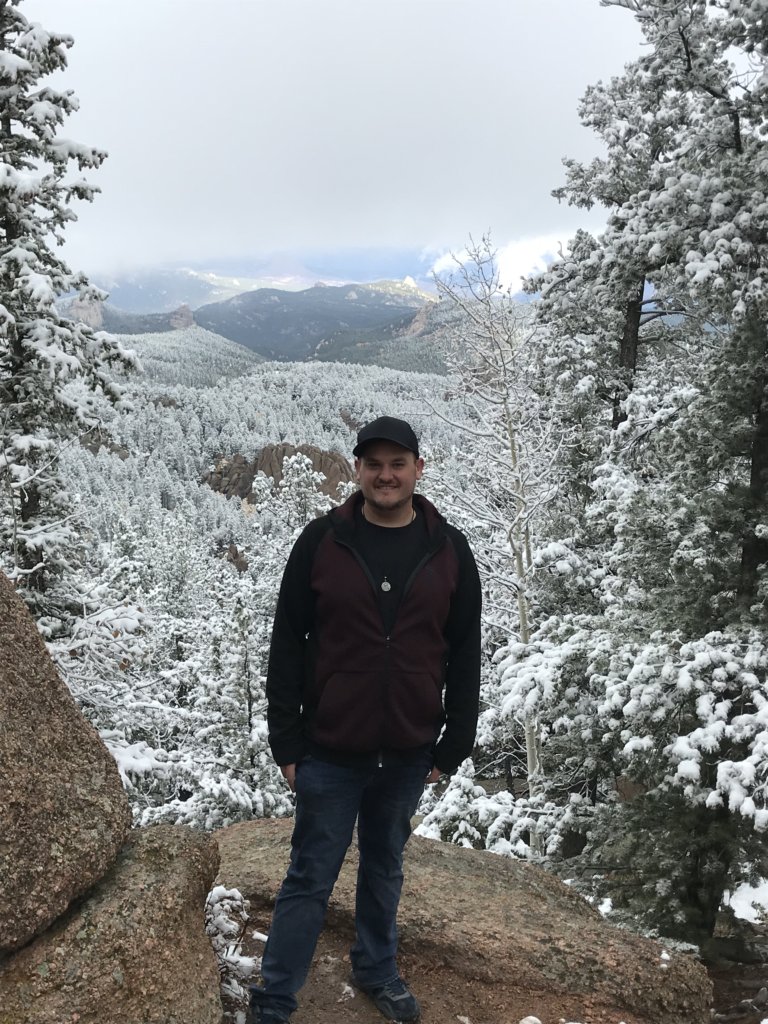 Now 28, Josh had grown up in a broken home with considerable emotional abuse.  Moving out at 16, he began college but dropped out after only a year or so.  A series of jobs followed but nothing was sparking his life – that is until he met Madison – she soon became his everything.  When his dad shared that Josh’s grandmother had left him her home, Josh and Madison were thrilled.  Sadly, however, his father allowed the estate to dissipate and the house was foreclosed.  Crushed, Josh tried to move on, only to come down with a mysterious set of symptoms (migraine headaches, numerous episodes of strep throat and an overall sense of great anxiety).  Unable to hold a job or do much of anything, Josh languished for months in a state of depression and hopelessness, ballooning to 350 lbs.  With no diagnosis forthcoming and Madison having broken up with him, Josh was as low as he had ever been; it was February of 2018, just 8 months ago.

Perhaps it was hitting that bottom that triggered something in Josh; or perhaps it was God reaching out to him in a quiet but real way.  Whatever it was, Josh woke up one day and decided to change his life – by radically changing the way he was thinking.  As he shared it with me, I could see his look of calm and peace as he repeated it, “Matt, I decided to totally change the way I was thinking about myself and my life.  I began to think thoughts of overcoming my challenges and living the life I really wanted to live and I pictured myself living a life of health, vitality, of interacting with others and helping others.  I crowded out all other thoughts and focused on the person I wanted to be.  And then I began to take steps to become that person.  I began to walk – at first, I couldn’t make it to the end of the block.  But slowly, hour by hour, day by day, I let my thinking drive my behavior – and I began to truly live.”  Doctors decided to take his tonsils out and that seemed to be an additional spur to recovery.  He also began making healthy eating choices and that, combined with the walking, produced a rapid loss of weight.

Eight months later (last Saturday), Josh told me that he weighs 230 pounds and works out two hours a day on an elliptical and with weights.  His goal is to get down to 200 pounds and to compete a year from now in the regionals of the American Ninja Warrior Competition.  He also is back pursuing his love of photography and reconnecting with family and friends.  And while he and Madison are not yet together, he is hopeful.

A pretty dramatic story isn’t it?  And yet, don’t all of us have the opportunity to make radical change in our lives by changing what we think about?  The great philosopher James Allen said, “as a man thinketh, so he is.”  In other words, over time we reflect that which we spend most of our time thinking about.  Think thoughts of lack, or bitterness or worry, and we will become anxious and depressed.  Think thoughts of health, vitality and joy and we’ll become positive, energetic and joyful.

Take an inventory of your thought life.  What do you think about much of the time – are your thoughts moving you towards becoming the best version of yourself (the one God made you to be) or are your thoughts defeating you and pushing you down?  You have total control over how you think.  Begin right now to think as you wish to become.  And watch out – you’ll find yourself changing as fast as Josh did!