There are two types of market corrections and anytime market volatility is more extreme than usual, we always need to be asking which of the two types of correction might be happening.

So, with the Dow declining over 1,300 points in two days, which of the two types is this?

We can cite numerous other data points but the bottom line is that Playbook #1 – this is a technical or “fear” based correction – is what lines up with the data. It is worth noting our Investment Strategy Team recently devoted a meeting to “what we would do in portfolios if we wanted to shift to defense?”  The data is not telling us it’s time to shift to Playbook #2, but clients should know we’ve drawn up the diagrams.

1. Seasonality. There is a term called an “October Surprise” on Wall Street and it refers to the fact that some of the market’s most volatile periods and biggest corrections often come in the month of October.  Surprise!  However, another seasonal occurrence is approaching and that’s seasonality associated with a mid-term election year.  As the chart below shows, seasonality tends to be much stronger than average for stocks in mid-term election years (like this one) and that positive seasonality often starts in mid-October. 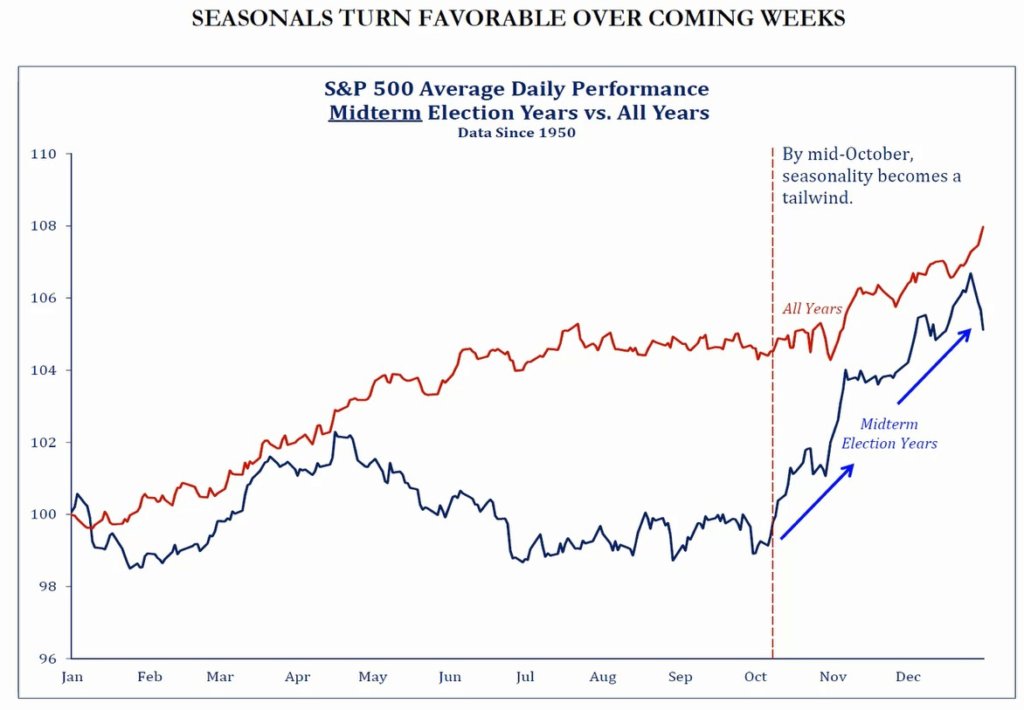 It is important to note that seasonality paints with a broad brush (averaging many years and even decades together) and that each year is its own year.

2. Markets and the Media. Jason Goepfert from SentimenTrader sent out a tweet yesterday that we found fascinating and humorous all at the same time.  The last two days we have seen headlines using emotionally charged words such as “massive” and “plunge.”  Goepfert did a study looking at the 3-month return following a “CNBC Special Market Report,” and according to his study, the market was positive 11 out of 12 occurrences with a median return of +5.4% after the use of either word in the headline of such reports.  The bottom line – it’s easy to say “don’t get swept up in the media” around these corrections, but Goepfert has numeric proof. 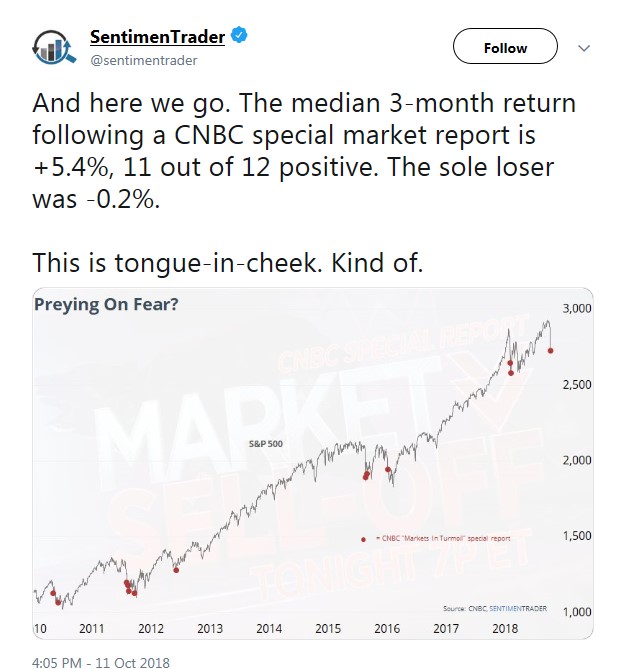 So, taking logic rather than emotion, we are still working with Playbook #1 – this is a correction in an uptrend.  We are looking for signs of changes in leadership within the stock market (we have a theory that value/dividend stocks start to outperform growth stocks), we are looking for opportunities to use volatility to make tax-savvy moves in client accounts, and we are constantly looking for data that might tell us it’s time to switch to Playbook #2.