Coffee with the CIO

Last week we held the first of what will become a regular event – “Coffee with the CIO” – at The Joseph Group’s offices. It was a casual gathering where clients and friends could enjoy good coffee and talk about what is happening in the markets with discussion led by The Joseph Group’s Chief Investment Officer, Travis Upton. Numerous topics were covered, but two main issues were clearly on the clients’ minds – 1) the continued saga of Greece, and 2) where to play offense in order to make money in what has been a flat market. We will address the first discussion point, Greece, today and will focus on the second, where to “play offense” to try to earn greater returns, in our next issue of WealthNotes.

Is Greece the Tip of the Iceberg?

Given the news flow, it was no surprise the happenings in Greece were top of mind. Everyone seemed to understand Greece itself was not a major issue. After all, Greece’s economy is only about half the size of Ohio’s economy and most of the debt Greece owes (and likely cannot pay) are to entities such as the European Central Bank which effectively have the ability to print their own money. The major concern investors have are the ripple effects Greece could create – “could Greece’s problems be the tipping point for larger problems in the world economy?” During our discussion, we addressed three “Red Flags” The Joseph Group’s investment team is looking for as warning signs problems could be spreading:

1. The 200 day moving average on the S&P 500. If the U.S. stock market crosses and stays below the 200-day moving average, it is a key technical sign the overall market is no longer in an “uptrend.” Currently, this level is about 2050 on the S&P 500, and while we have crossed below this level in the short run (especially during this week’s computer problems on the New York Stock Exchange), the S&P 500 is currently above this level meaning the market’s uptrend may be fragile, but it is still intact.

2. Rising interest rates in bigger indebted European countries, particularly Portugal, Italy, and Spain. If we see rates rise in other European countries that owe a lot of money, that’s a sign the crisis is spreading beyond Greece. As the charts below show, interest rates in these three countries have been declining for the last two years and any recent tick up in rates has been minimal compared to the overall market, indicating little market stress. We have been watching these rates daily and were particularly pleased to see rates in Portugal, Spain, and Italy actually decline during the recent NYSE computer shut down – a positive sign. 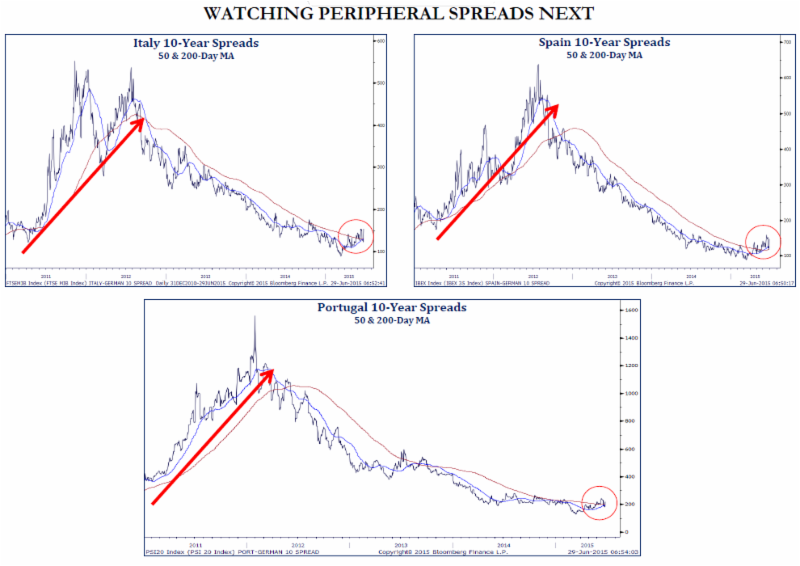 3. Rising prices for “default insurance” on major European banks. The final “red flag” we are watching focuses on signs of stress for the European banking system. At the risk of getting too technical, the price of “credit default swaps” on European banks tell us what institutions are willing to pay for insurance against one of these banks defaulting. In other words, if prices for insurance against bank failures are rising, it tells us institutional investors expect that a storm is coming. The crazy colored lines in the bottom panel of the chart below is what is important. As long as these lines are low and calm, it means there is little stress in the European banking system.

Having a clear focus on key metrics helps us do one of the key things clients hire us for – focusing on logic rather than emotion. Although it may feel more extreme, the recent pullback has brought the S&P 500 4% below the all-time highs reached in May – a relatively minor correction in historical terms. We have plans in place to play defense in client accounts should we need to, but until we see our “red flags” triggered we are approaching the recent correction as chance to look for buying opportunities. In our next issue of WealthNotes, we will focus on the second major discussion point from our “Coffee with the CIO” event – where to “play offense” in the current market environment.

Check out this article's companion entitled, Thoughts on Father's Day.