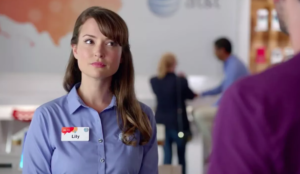 Most of us recognize Milana Vayntrub as the quirky lovable Lily from those fun AT&T commercials. But it’s her work helping refugees that’s really making a difference. In this issue of WealthNotes we share that part of her great life – via excerpts below from an article by Jessica Toomer and posted back in May in People Helping People.

Vayntrub recently launched Can’t Do Nothing, an organization that works with human rights groups on the ground, providing aid to refugees across the globe. Using the hashtag #CantDoNothing, the organization encourages people to share how they’re getting involved in solving social problems around them, using their voice, time or money. More than 320,000 people and counting are participating in the campaign.

Vayntrub was inspired to start Can’t Do Nothing on a trip to Greece. After watching a video of volunteers passing out sandwiches on a beach in Macedonia, she learned how dire the refugee crisis had become. Vayntrub skipped her flight back to Los Angeles and, after making a few connections with volunteers via social media, she hopped on another flight, heading to Lesbos, a Greek island off the coast of Turkey that has witnessed a huge influx of refugees in recent years. Vayntrub wasn’t associated with any of the relief groups already on the ground so she started helping in any way she could – filling her trunk with water bottles, passing out bananas and candy to children, gathering emergency blankets and rushing into the water to meet the the many small boats filled with refugees that by now were exhausted and terrified from their ordeal. She worked 14-hour days – helping strangers who had fled from violence and tyranny feel welcomed and giving them a bit of hope.

“It’s strange to say how much I enjoyed it, but I did really have a wonderful time there because it was never about me,” Vayntrub says. “I didn’t have a moment to think about whatever minutiae was stressing me out back home. It was nice to get out of your head and just give.”

The experience was eye-opening for the actress who, before Lesbos, only saw the refugee crisis through muddled news footage and media reports. Spending one-on-one time with the people helped her to see them in a different light. “When you get to know somebody it deepens your understanding of them and the compassion you have for them, for where they’re from and what they’re going through.” It also helped her connect with her own roots. When Vayntrub was just two years old, her parents fled the Soviet Union, leaving everything behind to come to America for a better life.

Vayntrub documented her time in Lesbos and shared the footage with family and friends who were eager to learn how they too could help. She created a website where people could find and donate to organizations helping refugees. She asked friends to use the hashtag #CantDoNothing to raise awareness about the refugee crisis and other humanitarian crises around the world. Soon, her desire to help others became a movement. “I know that sometimes it can feel hard to help and the issue can feel bigger than you,” she says. “I think that makes people feel inactive or disposable or insignificant and that’s really not true.”

Now, Can’t Do Nothing is a full-fledged organization partnering with other groups like the Syria Fund which provides education to children in refugee camps, to get the word out about all of the ways people can donate their time, money and energy to aiding others, even beyond the refugee crisis.

“I want to make Can’t Do Nothing a gateway for people to discover ways to take action about the things they care about,” Vayntrub says. “I hope it’s something that people use to talk about why they can’t do nothing about whatever cause or issue matters to them.”

We may not have the fame of Milana – but all of us have resources and connections that will allow us to make a difference in the lives of others – others in need. Today, consider how the great life you desire to live can include helping others achieve their great life.

Purpose – it gives joy and meaning to life!!