> Wealth Notes > Inform > Commodities: The Beginning of the End or the End of the Beginning?

On my desk is a copy of Anthony Sampson’s book, The Seven Sisters. The book details the history of seven of the largest oil companies that formed in the years after the breakup of John D. Rockefeller’s Standard Oil. It highlights some of the drama and political intrigue behind the discovery and exploration of the world’s great oil fields. Reading through it I can’t help but wonder if we’ve discovered all there is to discover. If so, what might be the implications of that? A question we debate quite a bit internally is what to make of inflation and commodities. After a lackluster decade in the 2010s, commodities have been one of the best performing asset classes this decade thus far. Is it time to take profits and run, or are there legs to this rally in commodities?

We’ll begin by looking at energy commodities. We’ve noted several times over the last year the decline in capital expenditures in the oil patch that began with the downturn in oil in the mid-2010s. There are many reasons for this decline, but the result is a tighter oil market going forward. One side effect of this underinvestment is the forced drawdown of oil inventories. Bloomberg has a chart they label the “Oil Piggy Bank”. The scale and numbers might be hard to see, but the trend is clear. The amount of oil in the US Strategic Petroleum Reserve is at levels last seen in the 1980s. Between low capital expenditure and low reserves, we think risks in oil are skewed to the upside.

While oil seemingly gets the most press, another critical area of the commodity complex is industrial metals. Some of you may have seen the news this week that California issued a rule that beginning in 2035 no internal combustion vehicles may be sold in the state. The current alternative, electric vehicles, are heavily dependent on a variety of industrial metals including nickel, copper, and lithium. The table below has made its rounds before, but it’s worth sharing again considering this week’s news.

But it isn’t just electric vehicles. The push into cleaner forms of energy requires a tremendous amount of resources. A 1.5MW GE wind turbine requires 200 tons of steel and nearly 10 tons of copper. Recently announced wind projects off the coast of New England call for 3,300 megawatts of capacity – 2,200 wind turbines. That’s a lot of steel and copper, what do supplies of copper look like? They’ve been higher. 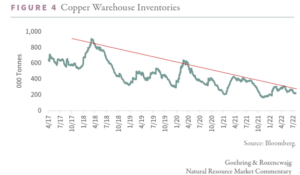 Agricultural commodities are notoriously volatile, but the story there is similar. Costs of production have gone up (fuel, fertilizer) and weather challenges have pressured yields globally. Countries like Sri Lanka have seen their leaders deposed by food crises. In the developed world the situation is not nearly as dire, but it certainly is putting upward pressure on food prices. As recently as July corn and wheat were twice their average price seen in the years 2016-2019, despite being off their recent highs.

The days of globe-trotting speculators discovering new oil fields detailed in Sampson’s book are over. Metals like copper and lithium are costly to extract and sourced from places with less stable political and social environments. Our view is that commodities will almost certainly remain volatile, but the issues of tight supplies and the cumulative effect of underinvestment in the last decade will make for a very different decade in the commodity market than the last one. Many of the client portfolios we have the privilege of managing have some degree of commodity exposure. In a year where the Bloomberg Commodity Index is up over 25% while a typical 60% US stock/40% US bond portfolio is down 11%, having exposure to commodities makes a big difference.

Check out this article's companion entitled, The Similar But Different Idea of Appreciation.