Divergences – When the Market is Telling Two Different Stories

Markets often tell a reliable story. Rising interest rates, usually an indicator of a strengthening economy, often portend better times ahead for banks. Small cap stocks are outperforming? It’s likely value stocks are as well. Interest rates are falling? The dollar is likely weakening. These aren’t hard and fast rules, but they’re likely to be true much of the time. When these usually reliable relationships are out of sync, it is wise to pay attention. 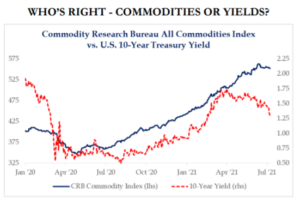 For the sake of brevity, we’ll end our discussion here, though there are several other divergences occurring in various asset classes. Divergences aren’t warning signs, per se, but they are flashing lights telling investors to proceed with caution. The resolution of a divergence can have a meaningful impact if one is positioned on the wrong side of the trade. This is one reason why our sentiments are “neutral” on several the asset classes we use in client portfolios. We’d much rather hit singles and doubles and “respect the tape” (pay attention to what trends are telling us) than swing for the fences and strike out.