As widely anticipated, earlier this week the Federal Reserve increased its target for short-term interest rates by 0.25% (from 0.25% to 0.50%).  The move was well telegraphed – prior to Wednesday’s meeting, the market (Fed Funds futures) were pricing in a near 100% chance the rate hike would happen.

What remains uncertain though is the Fed’s path for rate hikes in 2017.  In its announcement, the Fed indicated it is aiming for three more rate hikes in 2017, but the committee would remain “data dependent.”  We take the Fed’s outlook of three rate hikes with a grain of salt.  Going into 2016, the Fed indicated it wanted to hike rates four times this year.  However, due to lackluster economic data and concerns about international events, this week’s rate hike was the only one which ended up happening. The Fed may plan to hike rates three times in 2017, but being “data dependent” means politics, potential for tax reform, international events, and other factors means even Fed governors don’t know where rates will be next year.

What does all of this mean for bonds?  After all, when interest rates go up, bond prices go down.  The benchmark 10-year Treasury rate already jumped (and bonds corrected) after the Presidential election.  Today, the 10-year Treasury rate is 2.60%, slightly higher than the 2.27% rate where it started 2016.  The chart below provides some perspective of where long-term rates have been the last three years.  The 10-year rate hit an all-time low at 1.37% in July and has almost doubled in the last four months.  However, from a big picture perspective, July’s low rate was the outlier – the recent increase simply take the 10-year Treasury back to its recent range. 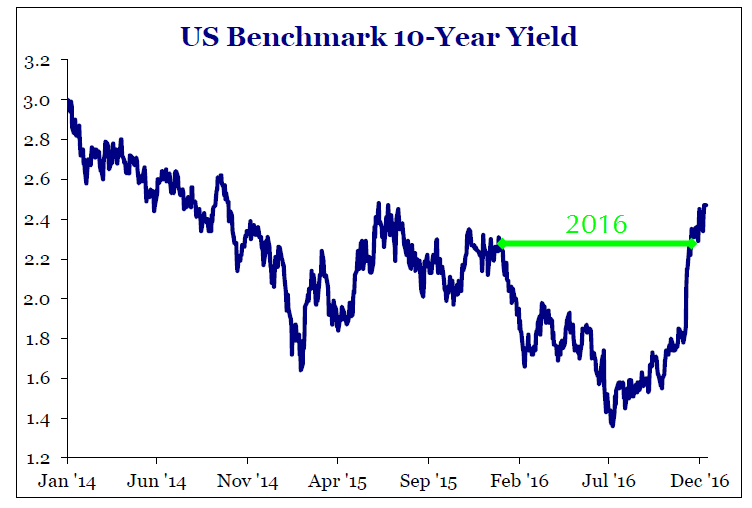 In terms of portfolio positioning, our asset allocation portfolios remain “underweight” bonds.  We believe the path of least resistance for rates is higher, so other asset classes are more attractive.  However, we think investors should understand we are NOT concerned about a “bond market plunge” as a result of rising interest rates.  Bonds remain a critical way for investors to reduce risk within a portfolio.  The chart below shows “worst case scenarios” in terms of “drawdown” (movement from a high to low) of bonds compared to stocks over the last 25 years.  While the worst year for the S&P 500 was 2008 where stocks fell -38%, the worst year for bonds was a -2.9% decline in 1994 where the Fed hiked the Fed Funds rates from 3% to 6% – the equivalent of twelve 0.25% rate increases. 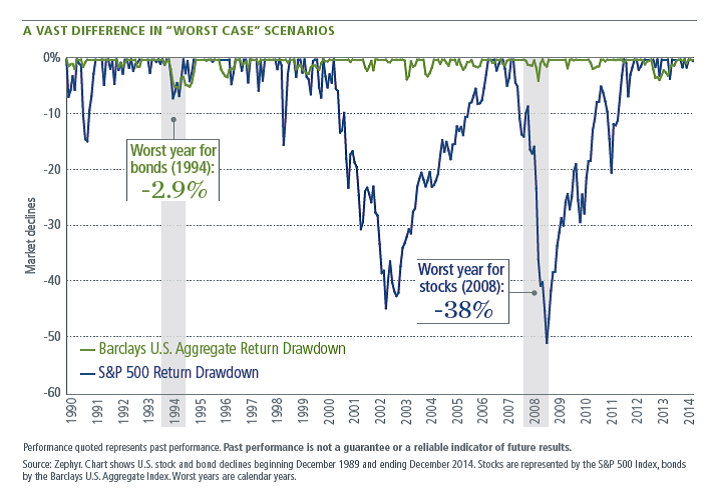 Rising interest rates means the “cushion” bonds provide against price declines is getting bigger because investors are able to earn more interest on new bond purchases.  In other words, as rates go up, the risk for bonds moving forward goes down.  At 2.60% for the base 10-year Treasury, bonds are still not attractive enough to dominate an investor’s asset allocation, but they are starting to look more attractive relative to cash.