During yesterday’s Federal Reserve announcement on interest rates, members of The Joseph Group team gathered around the TV in our team area to watch the announcement and the market reaction.  At 2:00 pm, the announcement came across that the Fed was increasing the Fed Funds rate by 0.25% (from 2.25% to 2.50%) and the Fed expects only two additional rate hikes in 2019 (down from three).  Both of these items were in line with what the market expected.  Immediately, we watched the Dow Jones Industrial Average (Dow) pop from being up around 200 points before the announcement to up 400 points.  After the announcement, Fed Chair Powell gave a press conference and the market clearly did not like what he had to say – at one point the Dow was down -500 points and finished the day down -350 points.  From 2 pm to 4 pm during the Fed’s comments, the Dow swung from +400 points to down -500 points – a wild ride to say the least.

Before we get into what the market did not like about what the Fed had to say, there is a chart going around Twitter that shows, in general, the market does not seem to be liking Jerome Powell as Fed Chair.  The market has now declined on seven straight Federal Reserve meeting days which is a streak that began when Powell became Chair.  Going back over 20 years, even in the Bernanke days, the market has not had such a consistent negative reaction to what the Fed was saying/doing. 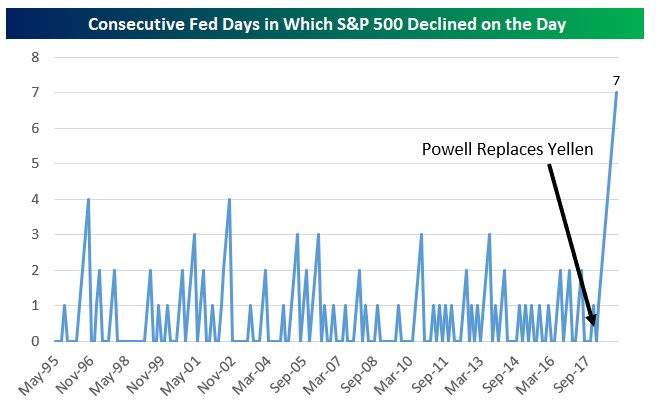 Despite the actual actions of the Fed (raising rates, reducing the outlook for hikes in 2019) being in line with market expectations, stock market selling accelerated during Powell’s post-meeting press conference.  Currently, the Fed is not just tightening financial conditions by raising interest rates, but they are also selling bonds and unwinding the “Quantitative Easing” stimulus that was put in place after the 2008 recession.  When Powell was asked if the Fed has considered altering the pace of selling bonds and shrinking the size of the Fed’s balance sheet, Powell said “No” and that the balance sheet reduction was essentially on “autopilot.”  The market clearly did not like the idea that the Fed would be continuing to remove stimulus with an “autopilot” approach that did not acknowledge changing market conditions.

The U.S. stock market hit new lows for the year after Powell’s comments and is clearly acting more in line with emotion than true economic fundamentals.  Here are three observations from our strategy team:

We wish you and your families all the best during this holiday season!

Check out this article's companion entitled, From Wedding Aisle to Toy Aisle.