With a backdrop of political headlines and strong economic data, most asset classes posted positive results for the first three months of 2017.  What we found most interesting though was the change in leadership from the end of 2016.  Areas of the markets which led the markets immediately after Trump’s election lagged in the first quarter, while areas which did not perform as well in November and December of 2016 were the market leaders in the 1st quarter of 2017.  Let’s summarize some of the results:

·         International stocks were the overall leaders.  The best performing assets in the first quarter were emerging market stocks (think China, India, and Brazil) and developed market foreign stocks (think European countries and Japan).  We’ve seen stronger economic data and cheaper valuations outside of the U.S. for a while; however in November and December of last year a post-election spike in the value of the U.S. dollar offset the returns earned by U.S. investors in foreign stocks.  During the first three months of 2017, both pieces worked.  Foreign stocks continued to perform while the dollar weakened and added to the performance earned by U.S investors.

·         Small cap U.S. stocks lagged.  After Trump was elected, small cap stocks had strong performance, likely in response to Republican plans for corporate tax cuts which would benefit smaller companies with higher effective corporate tax rates.  However, as seen in the chart below, small cap leadership did not continue in the first quarter of 2017 as small caps were the worst performers among major stock categories.  We believe small cap performance is likely to be especially volatile moving forward as investors react to the ability for the new administration to enact policy changes through Congress, especially tax reform.

Credit Outperformed High Quality Bonds.  As seen in the chart, high yield bonds, the best performing major asset class in 2016, continued to outperform high quality bonds (fixed income).  High quality bond prices are sensitive to changes in interest rates.  Even though the Fed increased short-term rates in March, longer term rates declined in the first quarter as the Fed indicated the pace of future rate hikes would likely be slower than the market expected.  As a result, high quality fixed income earned interest and a bit of price appreciation.  High yield bonds are more sensitive to economic conditions as a stronger economy means a lower likelihood companies issuing the bonds will default.  We do note with strong performance last year and continued price appreciation in the first quarter of 2017, high yield bonds are looking expensive compared to their historical averages and are an area we are looking to trim where appropriate within client portfolios. 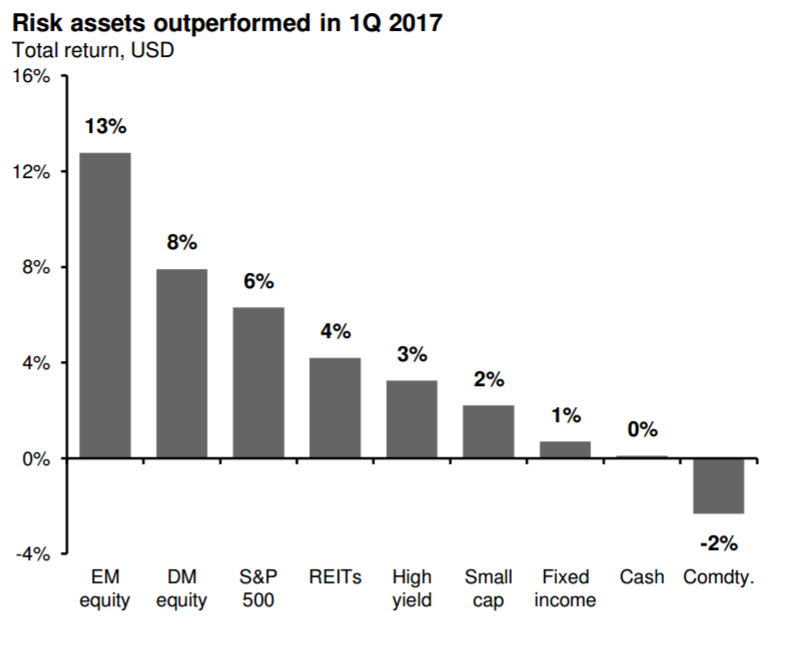 Commodities lagged due to oil.  Commodities were the only major asset class with negative performance in the first quarter.  A number of commodities such as gold, silver, corn, and wheat had positive results, but concerns over too much supply weighed on oil prices, resulting in a negative overall return for the commodity asset category as a whole.

The first quarter of 2017 is a great reminder of the dangers of “chasing winners” and the importance of diversification.  An investor who was chasing the asset classes which performed the best after the election would have likely loaded up on small cap stocks and avoided international stocks.  Clearly, looking at the chart above, this would have been the wrong strategy.

Check out this article's companion entitled, How to Live Life With Purpose.