Yesterday the Federal Reserve increased the Fed Funds rate by 0.25%, effectively ending a 7 year period of zero interest rates. The move in rates was widely expected, but the main event was what Fed Chair Janet Yellen said about the future….

Yellen’s key word is GRADUAL. Her statement signaled an expectation for further rate increases in 2016, but expressed caution about the current low level of inflation. The Fed’s implicit inflation target is 2% – with most inflation measures currently running below that, the Fed is likely to raise rates slowly until inflation accelerates. It will likely be a number of months before we deal with the issue of the next rate hike as the Fed digests the U.S. and global impact of yesterday’s move.

We’ve received a number of questions how the Fed rate hike might impact portions of their portfolio. Here are our views:

BONDS. One of the biggest questions we have gotten from clients is “Now the Fed has hiked rates, doesn’t that mean bond prices will go down?” It’s an intelligent question as most clients clearly know that interest rates and bond prices are like a teeter totter – when one end goes up (interest rates), the other end must go down. However, the answer is not that simple because we first have to answer the question “which interest rate are we talking about?”

Let’s look at how longer term interest rates have performed since we have had all of the talk about the Fed hiking rates. The chart below shows the interest rate on the 10-year Treasury bond, which currently sits at 2.25%. The rate has moved around a lot and was as high as 2.44% back in July. If we look at the chart though, the current rate on the 10-year bond is currently lower than it was 6 months ago, and is even lower than it was in mid-November. The bottom line – even though the Fed hiked rates, the price of high quality bonds in most intermediate bond portfolios is actually higher than it was 6 months ago. 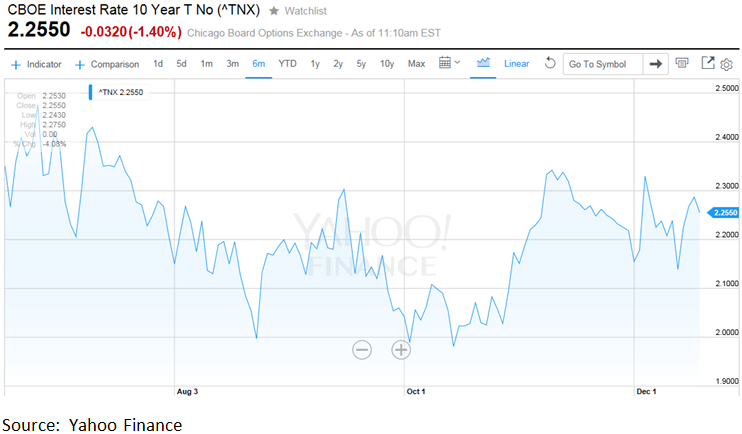 STOCKS. In the short run, stocks jumped on the news of the Fed rate hike, with foreign stocks leading the way. However, as we type this email, the market is giving back some of yesterday’s gains. Overall, the Fed rate hike is a positive for stocks because it removes a source of uncertainty. The market hates uncertainty and the “will they or won’t they?” from the Fed was clearly a source of volatility. However, now that the issue of the Fed has been pushed to the back burner, the market will focus on other issues.

Historically, the Fed has raised rates as a means to cool an overheating economy or rising inflation – that is not the case today. While the Fed hike conveys confidence in the stability of our economy, the fact is manufacturing activity in the U.S. actually contracted in November and credit conditions are showing signs of getting worse. Since these are not conditions consistent with other times the Fed has hiked, historical comparisons may not apply. As we look at the stock market, the Fed really isn’t much of a factor. Instead, we are keeping a close watch on credit spreads, manufacturing activity, and the impact of China’s currency moves on global markets.

Check out this article's companion entitled, Living in the Second Half of Life.