There is certainly not a shortage of topics to talk about as it pertains the economy and markets right now. Rising COVID cases in certain states, renewed lockdowns, the potential end of the recession which started in February (a bunch of June economic data was V-shaped and showed expansion), or the recent leadership of foreign stocks (emerging markets have trounced the S&P 500 in the last month) are all important items to discuss. However, the biggest question we are getting from clients right now is what about the election and what impact might it have on the markets? Since that’s the question we are hearing the most, let’s make that our focus.

First, history shows an upcoming election tends to have a statistically significant impact on markets about three months ahead of time. We think this makes intuitive sense. August is the timeframe when Vice Presidential candidates have been selected and party conventions are being held. It is also a time when rhetoric from the candidates seems to shift from winning over the party base to winning a popular election. We definitely are paying attention to the election and the potential impact it may have on markets, but we probably won’t make it a big focus for WealthNotes and Portfolios at Your Place events until we get into August. Until then, we want to be aware of what is happening, but believe the political/market headlines right now are more about noise and emotion than actual content.

That said, what is the real money PredictIt data (which has historically been more reliable than polls) showing right now? In the chart below, the red and blue lines being below the black line mean the probability of the Republicans maintaining control of the house and Trump maintaining control of the presidency are falling and the most likely outcome based on current data is a Democratic sweep. 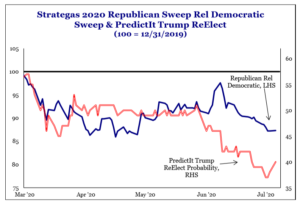 As we show this chart, we do think it is important to make a side note. We looked back four years at data from July 2016 and Donald Trump was behind Hillary Clinton in every swing state and was polling worse than any candidate in recent years who preceded him. A lot can change in a few months…

Second, when it comes investing, one of the key points we discuss in our investment strategy team meetings is we think it is important to focus on policies and not politics. We don’t put a lot of stock in the view Republicans are always worse/better for the markets than Democrats, but we have seen numerous studies trying to make one point or the other. Here is a chart showing some history of different political make-ups of Congress and the Presidency. The data shows returns for the S&P 500 have generally been good regardless of who is in control, although the weakest historical combination has been a Democratic Congress and Republican President. 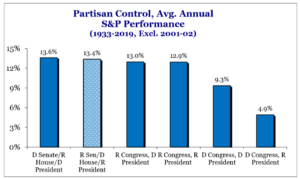 All of that said, when it comes to markets and policy, we are closely watching the idea corporate taxes may be higher under a potential Biden Presidency. Candidate Biden is proposing to raise the corporate tax rate from its current level of 21% to 28%. Regardless of how someone feels about the proposal politically, a corporate tax increase has a real impact on profits for U.S. companies and therefore an impact on the markets. We’ve seen estimates the proposed corporate tax rate increase would shave about 11% off of S&P 500 earnings and could have further ripple effects as some U.S. companies may reduce their dividend payouts to investors.

However, just because something may happen does not mean it will happen anytime soon. In a report we received this morning, former VP Biden is supposed to give a major speech today in Scranton, PA, but the speech is not supposed to mention tax increases. A view is growing among analysts that while the proposal to increase corporate taxes is out there, even if elected, Biden knows the economy is at a fragile place with the backdrop of the virus and any tax hikes could come much later rather than sooner.

We will wrap with one final point to consider – we received an email question from a client yesterday about how our investment approach would change if Biden were elected. Again, our focus is on policies and not politics. We’ve noted Biden policies tend to correlate more with a weaker dollar than Trump policies. We’ve also noted as Biden’s polling data has gone up; the U.S. dollar has generally weakened. All of this is a strong backdrop for foreign stocks, and again, we note in recent weeks, we have seen a sharp trend change as foreign stocks have begun to outperform U.S. stocks. Some of the performance could be related to the fact that recent COVID-19 growth has not picked up overseas like it has in the U.S., but in our strategy team meetings, we are very aware of the leadership shift. Ultimately, our goal is to make sure regardless of which candidate wins the election in November, our clients are winners in their portfolios.

Check out this article's companion entitled, Finding Strength in Proximity.