> Wealth Notes > Inform > Forecasts Are for Show – and Shows Are Entertaining

Forecasts Are for Show – and Shows Are Entertaining

Earlier this week we held our regular “Portfolios at Panera” and “Markets on Marconi” events where the primary discussion topic was how we were allocating portfolios as we start 2017. One of the key discussion points was our current target “overweight” to stocks within our Harvest strategy and how we are structuring that allocation across U.S. and foreign stocks, and large and small companies.

A question which came up at both events was “Where do you think the stock market will finish 2017?” That’s a loaded question – we don’t claim to have a crystal ball and we prefer to talk about the actions we are taking in portfolios to seek opportunities and manage risk rather than make forecasts. Being in the investment business and watching strategists who do make forecasts (usually incorrectly) has convinced us the best way to handle “where do you think the stock market will be on “X” date?” is to dodge the question.

Of course, we did not want to leave the clients and friends who were curious about where the market might close on December 31, 2017 empty handed, so rather than come up with our own crystal ball we referenced the forecasts from strategists at major investment banks. 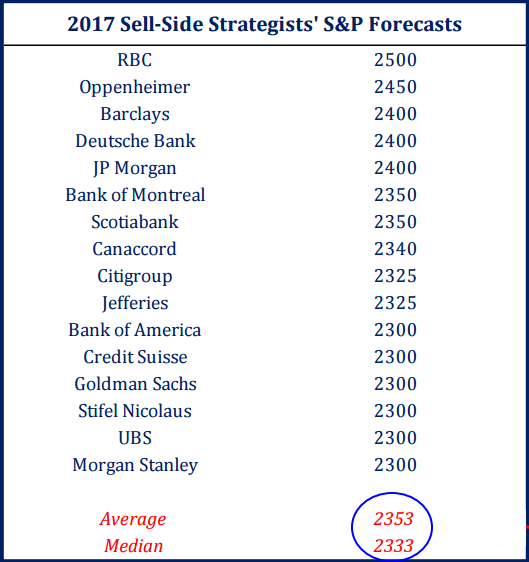 Most investors would probably look at sub-5% returns conservative. It strikes us as interesting that despite widespread optimism about the economy and what might happen with potential tax reform and other pro -growth policies, analyst expectations are rather muted.  After all, 6 of the 16 banks are forecasting the S&P 500 will end the year essentially unchanged from current levels.

Why do we think most of the forecasters are so conservative? We think it boils down to one thing – valuation matters.  After outperforming for the last few years, large U.S. stocks, like those in the S&P 500, are expensive based on a variety of metrics compared to their history. As we discussed in presentations this week, justifying an “overweight” to stocks means looking at areas outside of the S&P 500 which may be cheaper and better positioned to benefit from policy changes. When it comes to putting together portfolios, we think looking beyond the S&P 500 and structuring a stock allocation to include international and emerging market stocks which are trading at lower valuations than the S&P 500, as well as small cap stocks which might receive a greater lift from tax reform.

One of our favorite quotes, with credit to Steve Leuthold, is “forecasts are for show, but changes we make in portfolios throughout the year are for dough.” We don’t claim to know if the S&P might finish 2017 at 2300 or 2400, but it’s our job to know the goals and dreams of our clients and look to manage risk and seek opportunities on their behalf.

Check out this article's companion entitled, Susan Zanner, A Gift.