The events this week in Washington DC were tragic regardless of what side of the political aisle you are on. We pray for our country and we pray for healing.

We now know the election results – Congress has certified Joe Biden’s election as President and in a surprise based on where polls and prediction data were up until a few days ago, Democrats won both Georgia Senate seats. The Senate is now split 50/50 between Republicans and Democrats with incoming Vice President Kamala Harris casting tie breaking votes.

Many prognosticators expected a market decline if Democrats captured the Senate as the “blue ripple” of Democrats controlling the Presidency and both houses of Congress increase the likelihood of further spending and tax increases. However, markets have had a different plan. On the day the Georgia Senate results were announced, the Dow rose over 400 points and is up over 200 as I type this WealthNotes. So, what have we learned from the last few days when it comes to what might be in store for markets in 2021? Here are a few key observations: 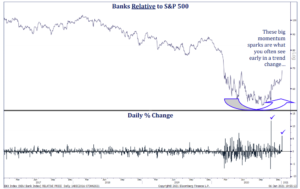 Source: Strategas Research Partners as of 1/6/2021

The market doesn’t necessarily care about what people believe “should” happen and we’re seeing that so far in 2021. In the midst of New Year’s resolutions and predictions, this time of year we love the quote from market guru Steve Leuthold that “predictions are for show; portfolio changes are for dough.” In fact, we’ve borrowed Steve’s quote as the title for our next Portfolios at Your Place event on January 19th at 4pm where we will talk about how are positioning the objective-based portfolios we manage on behalf of clients and changes we are making in those portfolios as we start 2021. We invite you to join us!

This article was written by Travis Upton, Partner, CEO and Chief Investment Officer

Check out this article's companion entitled, Discover Your Later-in-Life Passion Through Determination and Grit.