> Wealth Notes > Inform > How Does the Make Up of This Year’s Stock Market Returns Differ from Last Year?

How Does the Make Up of This Year’s Stock Market Returns Differ from Last Year?

In 2017, global stock markets were firing on all cylinders.  Earnings were growing, companies were paying dividends, prices were going up, and a weaker dollar even provided a tailwind for foreign stock returns.  In 2018, returns in the global stock market have been harder to come by despite tax reform creating a boost for earnings here in the U.S.  Looking globally, why are stock returns so much lower this year?

Perhaps it’s because we are investment nerds, but we find the chart below very informative.  The chart compares stock market returns for different regions in 2017 with year-to-date 2018 and breaks those returns down into various components.

In 2017, foreign stocks, especially emerging markets, dominated and the stacked bars show why.  Here is a breakdown of the left-hand side of the chart below:

Overall, emerging markets were the place to be last year as earnings were strong.  Also, because multiples increased LESS for foreign stocks than the U.S., on a relative basis, foreign stocks got cheaper compared to U.S. stocks despite their outperformance. 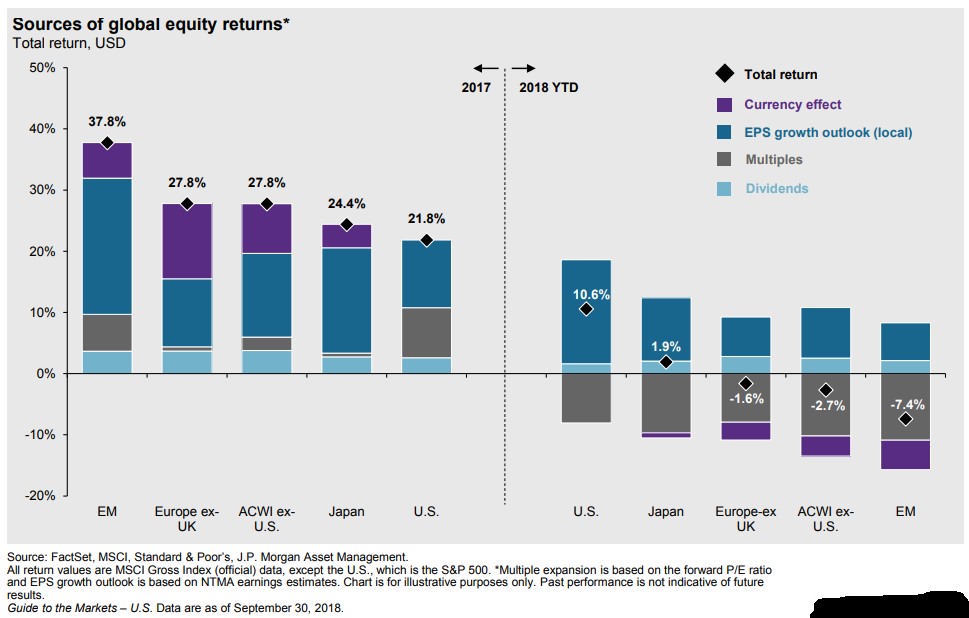 For the first nine months of 2018, there is only one area which has produced meaningfully positive total returns.  Let’s dig into the right-hand side of the chart and look at why:

This year has been a struggle for diversified investors.  While U.S. stocks have done well, falling multiples across the board have been a drag on global returns, especially for foreign stocks where falling multiples have coincided with headlines about tariffs.  Looking forward, we draw a few conclusions:

Check out this article's companion entitled, Becoming a Virtuous Leader.