Inflation: A Repeat of That 70s Show?

One of the interesting things about investing is that one can look to the past for parallels that can help navigate the present environment. We’re often asked how high we think inflation can go, and for how long. Sometimes in these conversations a repeat of the 1970s comes up as a worst-case scenario. With history as our guide, we’ll look at the similarities and differences between the 1970s and today and hopefully answer the question, “Are we in for a repeat?”

A paper recently published by Dan Alpert of Westwood Capital Management does a masterful job addressing the underlying causes of inflation in the 1970s and compares those to what we’re seeing today. In the 1970s, like today, aggregate demand (the amount of stuff people wanted and needed to consume) was high. One of the most important factors pushing demand higher then was the crush of Baby Boomers entering the workforce and their prime consumption years. The number of workers in the 25-34 age category doubled inside of a decade, after remaining relatively flat for the prior two decades. 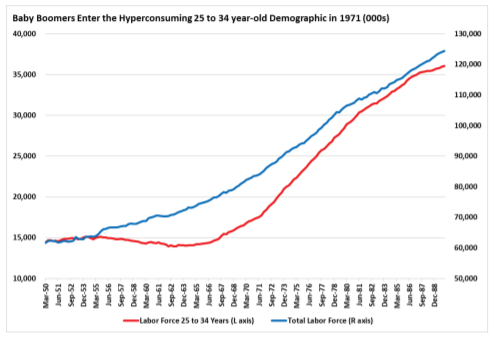 Today, the demand picture is a little different. One can say it’s less “organic” and more a result of the tremendous amount of wealth transfers enacted as part of the U.S. government’s response to the Coronavirus pandemic. The chart below indicates just how significant those wealth transfers were and the resulting impact on personal income. This income resulted in a tremendous demand surge crashing into a supply picture that COVID-19 has scrambled. 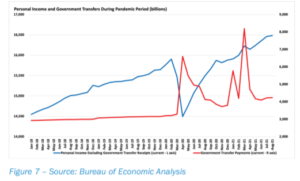 This stimulation of demand, then organic, today more artificial, is where the parallels end. In his paper, Alpert highlights two important contributors to inflation in the 1970s that simply don’t exist today. One contributor was Nixon’s decision to end the gold standard in 1971 and the resulting collapse of the Bretton Woods System. The other was the twin oil price shocks of the 1970s. The chart doesn’t do it justice, but the move in oil prices during the 1970s was 1000%. Affecting both disposable income and the cost of goods, this move in oil prices had a marked impact on inflation in the 1970s.

There are no such developments today. The global monetary system is continuing to function the way it has for much of the last 50 years with no apparent changes on the horizon. Input costs, while rising in part due to the Coronavirus pandemic aren’t rising at the rate they did in the 1970s.

We believe it’s possible to experience a rate of inflation higher than what we’ve experienced in recent years, and that some of the recent upward pressures in prices may prove to be more than transitory. That said, there’s little evidence at this point to show that we’re in an environment where a re-run of the inflation of the 1970s is likely.

Check out this article's companion entitled, Gratitude for Forgiveness.