To understand this move in rates, it’s important to understand where we’re coming from. Prior to the panic experienced in March of 2020, the 10-Year Bond never traded below 1.35%. In March of 2020 it went as low as 0.31%. Panic drove yields to record lows and Federal Reserve bond buying, or quantitative easing (QE), held them near these levels. As the economy recovers from the effects of COVID-19, the Fed has been signaling a reduction and eventual end to QE. The combined effects of an impending reduction in QE and what investors believe may be as many as four hikes to the Fed Funds rate this year jolted fixed income markets out of their complacency.

Markets typically react violently to such rapid change. At one point last week the Financials sector was up more than 5% while the technology stock-heavy Nasdaq was down more than 5%. To put that in historical perspective, the one-week relative return of financials versus the S&P 500 was the best since early 2009. 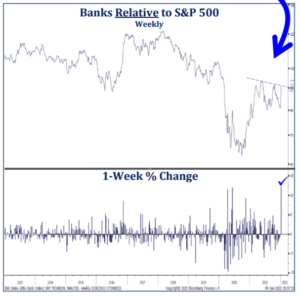 You might be saying, “thanks for the history lesson, but why is this happening?” For high growth stocks, an increase in interest rates has a direct impact on current valuation. Why? It all comes down to the concept of time value of money. For many of these growth stocks, a good bit of the “value” is far in the future. Think of the company that is growing sales at a rapid clip but still isn’t profitable. Investors expect eventual profits, but it may be years in the future. When interest rates go up, the required return goes up, pushing stock prices lower.

While we’ll never claim to have a crystal ball, we think the odds favor continued increases in interest rates over the short-to-medium term. A less accommodative Federal Reserve and an economy running hot with inflation in the mid-single digits doesn’t augur for rates to stay low. The impact on portfolios may be better returns in those sectors that tend to do better in rising interest rate environments.

We’ve certainly seen that so far this year, with financials and energy stocks up significantly relative to the S&P 500 and the Nasdaq. Higher rates typically trickle through to banks in the form of higher net interest margin. Rising rates are also emblematic of a resilient economy, benefitting economically sensitive sectors like energy. 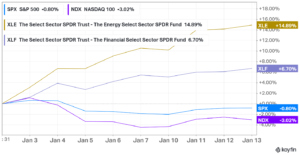 With increased positions in some of the portfolios we manage for clients in these areas, we’ve been pleased with this kind of start to the year. That said, two weeks is too short an amount of time to say what we’ve seen to start the year is a one-way train. 2022 will likely bring its share of ups and downs and its possible some of these hotter corners of the market take a breather. That said, we think that ultimately the path for these more “rate sensitive” sectors is higher.

Check out this article's companion entitled, Three Gifts of A Hand-Written Letter.