> Wealth Notes > Inform > Interest Rates Have Moved Up – Is It Time To Buy Bonds?

Interest Rates Have Moved Up – Is It Time To Buy Bonds?

Earlier this week we held our monthly Portfolios at Panera session and had a terrific discussion about the “why” behind our allocation and fund manager decisions.  One of the big topics on people’s minds seemed to be bonds.  With stock market volatility increasing and interest rates higher, is now a good time to shift into bonds?

Before we directly answer the question, let’s look at a little history.  The 10-year Treasury note is a good place to look to get a sense of what has happened with interest rates and the bond market.  The chart below shows the interest rate for the 10-year Treasury note over the last five years.  In 2013, the 10-year rate moved up significantly from low levels and hit 3%.  For the next two years (2014-2016), the rate drifted lower and in July of 2016, shortly before the Presidential election, the 10-year note hit an all-time record low of 1.37%.  Investors were willing to lend money to the U.S. government for 10 years and only be paid 1.37% for the privilege!

Rates jumped when President Trump was elected and largely drifted sideways for the next year.  The 10-year note started calendar year 2017 at a rate of 2.44% and ended the year at 2.41%.  So far in 2018, a combination of inflationary pressures, Fed hikes, and tax reform has put upward pressure on interest rates and in recent weeks, the rate on the 10-year note has been hovering around 3%, the highest level in over four years. 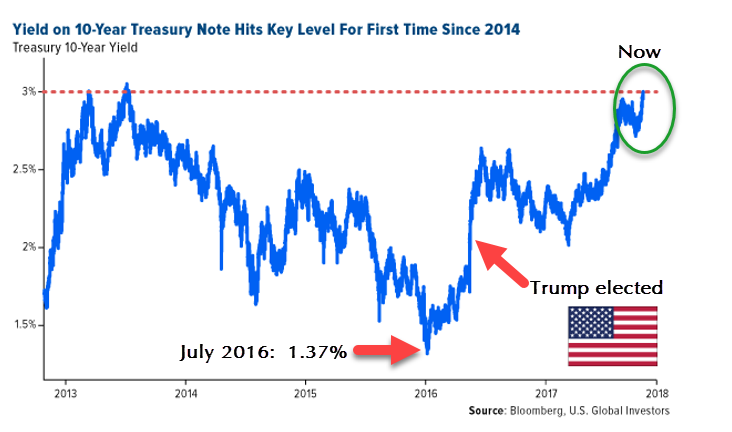 With that history lesson, let’s get back to the question – is now a good time to shift allocations into bonds?  After all, the relationship between interest rates and bond prices is a lot like two ends of a teeter-totter.  When interest rates go up (like they have recently) bond prices go down.  The 10-year note at 3% effectively means bond prices are at their most attractive levels in over 4 years.  Let’s answer the question with what The Joseph Group is actually doing in portfolios.

Tactically, we’ve been rebalancing portfolios and buying bonds on days when the 10-year rate exceeds 3%.  Clients may have noticed a few trade confirmations come through in recent weeks.  Most of these trades are not large, but for accounts where bond allocations are under our targets, higher interest rates provide a good opportunity to bring allocations back to target at attractive rates.  It’s also worth noting that for these trades, we are not buying government bonds – we continue to favor high-quality corporate bonds which pay higher rates than Treasuries but still provide a cushion against stock market volatility.

When it comes to our big picture asset allocation views, we are still “underweight” high-quality bonds relative to what we would consider a “neutral” position.  We are NOT yet making big shifts out of stocks or other asset classes to increase our allocation to bonds.  We believe we could continue to see inflation pressure and even though rates are at their highest levels in four years, rates could continue to drift higher.  We also believe recession risk is far enough in the future that even with volatility, stocks offer more upside potential than bonds.

Bottom line – we recognize interest rates are at their highest level in years and are using the opportunity to rebalance portfolios, but we think it’s still too early to load up in the bond market.

Check out this article's companion entitled, 3 Key Contributors to Happiness.