If you’ve picked up a newspaper this week or watched any financial news, you’ve seen that interest rates have moved sharply higher in recent weeks, culminating in last week’s intraday spike to 1.61% in US 10-year treasury bonds. While this may not sound like a lot, it’s important to consider the rate of change. The rate on the 10-year treasury bond began February at 1.07% and started the year at 0.93%. A nearly half percent move in a month, especially with such low starting yields, is worth our attention.

The accompanying chart uses some technical terms that can be summed down to this – significant moves in interest rates, either up or down, usually coincide with weakness in the S&P 500. A rapid decline in interest rates is often accompanied by worsening economic conditions or some sort of external crisis like the outbreak of COVID-19 early last year. On the flipside, a rapid increase often spells weakness for stocks as it implies tighter financial conditions. The “Goldilocks” zone is one in which interest rates take their time to get wherever it is they are going, higher or lower. 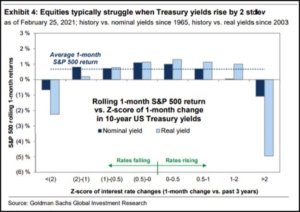 I was recently asked about safe places to put one’s money. One idea that was suggested to me was a bond index fund. I was uneasy about this, because there are times when investing in bonds isn’t as safe as perceived. We think about bonds having different kinds of risks. There is default risk (the risk the issuer doesn’t pay back the borrower) but there is also interest rate risk, which is the impact on a bond’s price should interest rates rise. We often use the analogy that interest rates and bond prices have a teeter-totter like relationship. When rates move up, prices move down, and vice versa. The chart below shows the price return in the 30-year treasury bond since November. The price of this bond has fallen 16.3% in three months, ten years’ worth of coupon payments. Knowing even “safe” US government bonds can move like this in times of rising interest rates, my advice for the person asking for a safe place for their money was cash. 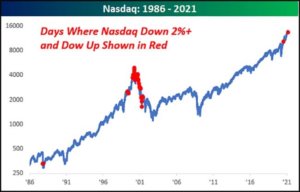 As we’ve seen in recent days, stock prices haven’t been immune from the effects of rising interest rates. Rising interest rates imply tighter financial conditions (less borrowing, slowing economic growth) and chip away at the relative attractiveness of stocks. Rising interest rates also can affect stock valuations, especially for higher growth companies. Companies that may not generate much cash now but are expected to in the future are particularly sensitive to interest rate moves. We saw this recently when the Nasdaq, whose constituents are typically higher growth stocks, was down more than 2% while the Dow Jones Index, which is comprised of a mix of value and growth stocks was positive.

The good news is that equity and fixed income investors need not be doomed by this increase in interest rates. Owning bonds with short maturities can blunt the impact of rising rates, as one can reinvest proceeds from these bonds at higher rates. Finding attractive stocks in this type of environment forces the investor to ask which sectors are least impacted and may even be helped by this environment. The chart below shows the relative performance of sectors in the S&P 500 and their performance in periods of rising interest rates. Historically, financials have outperformed while health care, utilities, and real estate stocks have been underperformers. 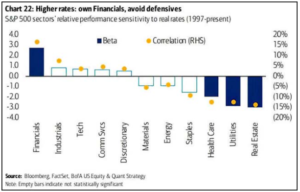 At some point, we will see more normal moves in interest rates. With investors trying to handicap the effects of restarting the global economy along with record levels of fiscal and monetary stimulus it’s no surprise that we’ve seen more volatility lately. The playbook for periods like this is to minimize your interest rate risk in bonds and to think about which sectors (financials) and styles (value) are primed to benefit from a rise in interest rates. Eventually this sharp move will be digested by the market, but where leadership lies on the other side may look different than it has over the last year.

Check out this article's companion entitled, Take Nothing for Granted.