Last week, the U.S. Federal Reserve increased their upper target for the Federal Fund Rate (think short-term interest rates) from 0.75% to 1.00%. The increase was the second rate hike in the last three months, but only the third hike since the global financial crisis.  (For perspective on the Fed funds target rate since 1982, see the chart below).

The rate increase itself was widely expected, but the “soft” rhetoric from Fed chair Janet Yellen was somewhat of a surprise to investors.  At a news conference following the Fed’s decision, Yellen stated that the Fed “did not share the optimism of stock market investors and business executives that the economy is gaining speed.”  In other words, the Fed still plans to move slowly with further increases because the economy continues to grow slowly.  According to Yellen, “The data have not notably strengthened. We haven’t changed the outlook.  We think we are moving on the same course we have been on.” At the beginning of this year, the Fed indicated it expected to increase interest rates three times in 2017. Some investors believed the Fed might increase their expectations to four rate hikes total after this week’s rate hike, but Yellen’s press conference put those concerns to rest.  As this point, the Fed only plans to increase rates two more times between now and December 31.

The reaction from the financial markets to Yellen’s comments was positive – every major asset class we track (bonds, stocks, commodities, real estate, etc.,) increased after the rate hike.  The market’s response was less about the rate increase, and more about Yellen’s comments that the Fed is currently inclined to keep rates lower for longer.

Here are some of our thoughts on the response to the Fed rate hike from different areas of the financial markets. 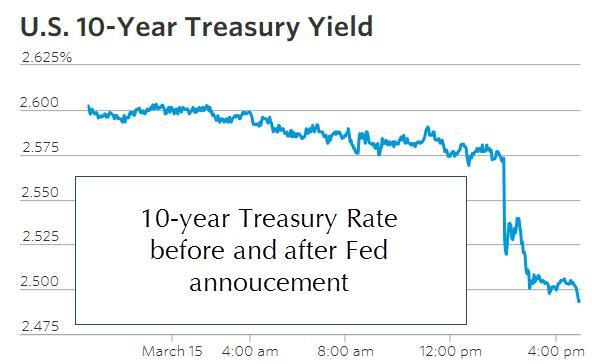 Why?  If the Fed is going to increase short-term rates slowly there is less of a reason for long-term rates to move up.  At the benchmark 10-year Treasury’s current level of 2.52% (compared to 2.59% last week), longer-term interest rates have moved up from last July’s all-time record lows, but are currently in the same general range they have been in for much of the last 3-4 years.   From an investment perspective, we believe investors who are hiding out in cash waiting for rates to increase (and bonds to decrease) are missing out on the interest they could be earning on intermediate bonds as longer-term rates stay range-bound. 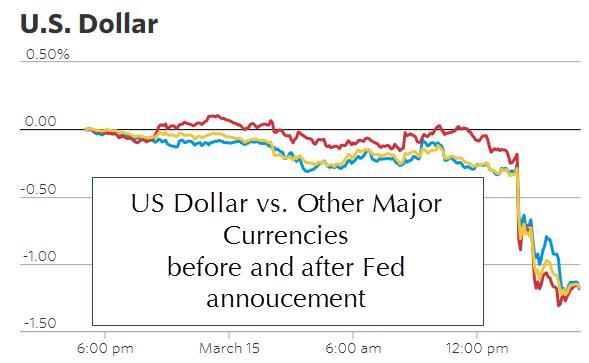 Here’s the detail behind the conclusion.  When we look at fundamentals, valuation and growth characteristics for international stocks are strong.  In fact, when we look at pure stock performance since Donald Trump’s election, foreign stocks have broadly outperformed U.S. stocks.  However, currencies, specifically the strength of the U.S. dollar, have put a damper on the returns earned in foreign stocks by U.S. investors.  When the dollar gets stronger, the returns from foreign stocks will buy fewer dollars, which in turn hurts the total return earned by U.S. investors.  On the other hand, when the dollar is weaker, returns from foreign stocks will buy more dollars, which in turn increases the return to U.S. investors.  With the Fed indicating they plan to increase rates slowly, the dollar weakened (less attractive), giving a tailwind to international stocks.

Real Assets/Commodities.  Another big winner in the market in the days following the Fed rate hike were inflation-sensitive real assets – specifically commodities, real estate investment trusts (REITs), and infrastructure.  With the Fed keeping rates lower for longer, inflation has more room to move higher.  In the post-rate increase press conference, Yellen stated, “It’s a reminder 2 percent is not a ceiling on inflation, it’s a target.”  Inflation expectations have been rising ever since Trump’s election, and Yellen’s comments indicate the Fed will allow inflation to rise further before it taps the breaks.