Every Monday morning The Joseph Group’s management team gets together for our weekly leadership meeting. One of the items on the agenda each week is our “quick hitters” – items which will only take a minute or two to talk about in order to provide information or to make a quick decision. With everything going on in the markets, we thought this week would be a great opportunity to provide a few “quick hitters” with regard to the investment world.

The stock market’s rally off of the March 23rd lows has been historic both in terms of speed and magnitude. Strategas Research Partners looked at the market’s behavior after the 10 strongest one-month percentage changes in history and how the market tended to behave afterwards. What they found was that the next month or two is sideways and choppy, but the following 12 months has a tendency to see strong gains.

We always want to include the caveat that history never repeats itself exactly, and we are clearly in uncharted waters with the virus. That said, we think this chart is important because it summarizes in one picture what we are hearing from multiple research outlets – choppy markets in the short run, but optimism about the longer run as businesses reopen and adjust.

Is It Good to See Some Air Pollution?

Speaking of recovery, TJG Portfolio Manager Alex Durbin sent this out to our team yesterday. The yellow and red in the pictures below show the levels of carbon dioxide in China. The first three pictures show the change this year and the third picture is key – carbon dioxide levels have increased as factories in China have come back on line. However, a comparison with the fourth picture shows air pollution is still not where it was a year ago. The implication is that a recovery in manufacturing is clearly happening in China (which was the first area to be hit with the virus) but the recovery still has a ways to go to get back to year ago levels. 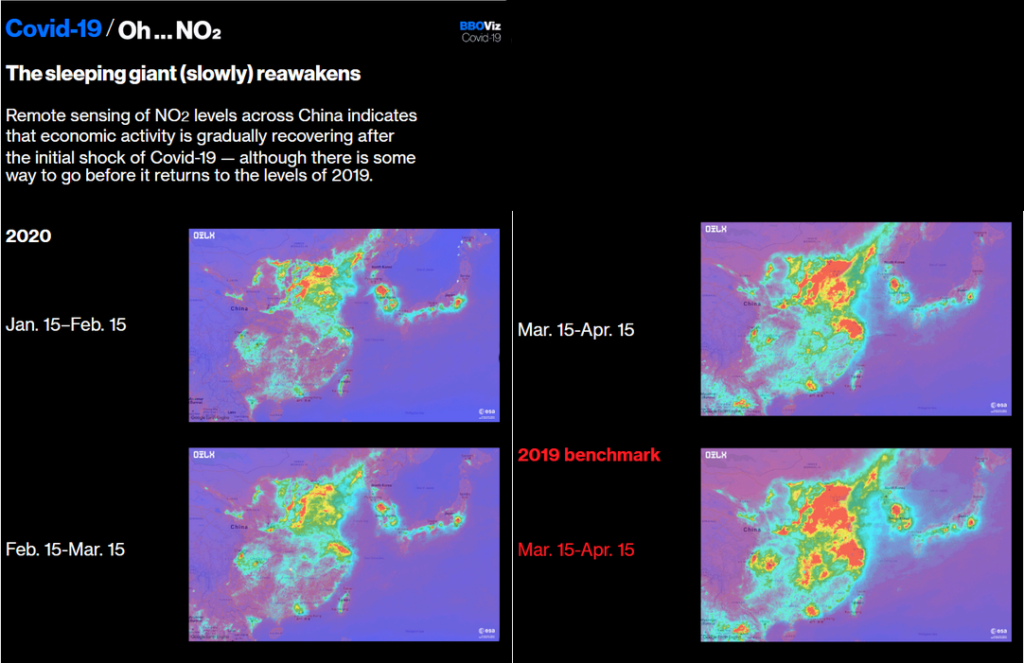 Contango is Not Our Kind of Dance

This may be a bit longer than a quick hitter, but of course, we have to talk about oil. With the May contract for U.S. light sweet crude oil hitting -$40 per barrel (yes, that was a minus sign) this week and the current June contract trading at $17 as I type this, there has clearly been a lot of action in oil prices.

First, I have to share a personal note. I am so proud of my oldest son, Spencer. Tuesday evening, I came home and was trying to explain to my family that -$40 per barrel oil effectively meant someone was giving you a barrel of oil and rather than paying them for it, the person was paying you $40 to take it. Rather than the usual “that’s nice Dad” comment, my son Spencer said, “should we just get some oil then and keep it in the garage for a while and sell it when the price goes back up?” I was so proud – my son is going to college in the fall to pursue physical therapy, but we may make an investment person out of him yet.

We had a number of clients ask, should we buy oil? Of course, the answer is a little more complicated than storing it in a garage. First, some education. When we look at a recent quote for “the oil price” what we are actually talking about is a futures contract which allows someone to take delivery of a barrel of oil at the agreed upon price at a set date in the future. These contracts trade all of the time, but most contracts are closed out before the delivery date and no physical oil ever changes hands. The expiration of the May contract (for May delivery of oil) was April 21, so unless someone actually wanted the physical barrels of oil, they needed to close out their contract on Tuesday. With storage capacity in short supply, few investors wanted to take delivery and there a plunge in the price of the May contract as investors rushed to close out their position.

Meanwhile, when the May contract expired, the “new” contract became the June contract. Which maintained its positive value. From Tuesday to Wednesday, the prevailing contract in the market flipped from May to June and oil once again had a positive value.

So, with all of that background, here are two points. First, for someone to truly take advantage of the oil price discrepancy, they would have to have storage capacity for the physical oil. But, you may ask, what about funds or ETFs which track oil prices? We don’t want to touch them and here is why.

Contango is a fancy term in finance textbooks where the futures price of a commodity is higher than the current price. Below is a screen capture from the CME Group showing crude oil price quotes. You can see the quote for the June contract is $16.93, the July contract is $21.29, the August contract is $23.94, etc. This is an example of contango – the futures prices further out are higher than the near-term prices. Over time, these prices will converge and the futures price will become the near-term price. While prices may fluctuate, as long as the contango structure is in place an investor wanting to get exposure to the near-term futures prices will constantly be buying a more expensive contract and selling a cheaper contract. In other words, contango is a recipe for constantly buying high and selling low and that is not our kind of dance. 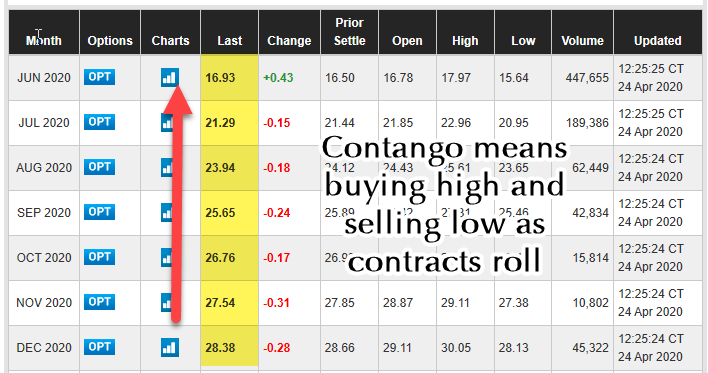 One final note on oil – despite the craziness in the pricing of the May futures contract, the price of an index which tracks energy stocks fluctuated in a pretty tight range and is actually up on the week and over the last month (the bottom was on March 23 with the rest of the stock market). Oil companies are struggling like the rest of the economy, but stock prices of energy companies appeared to look past the pricing of the May contract. I just ran the numbers and since Tuesday, the price of an index which tracks energy company stocks is up 5.5% while the price of a fund which rolls oil futures contracts is down -30.4%.  Since Tuesday. We may have some good moves, but we don’t do the contango.