We’ve seen a few personalities in the financial media call this month “The September to Remember” because there is a lot going on in the world. Let’s take a look at a non-exhaustive list:

With next week’s meeting supposed to be the “warning to the market,” Goldman Sachs recently increased their odds of an official “taper announcement” happening in November to 70%.

Wow – that’s a lot going on.  With all of this happening, the market is bound to have volatility and experience a correction, right?  Are there any periods in history where there has been a similar confluence of events?

One of our favorite phrases is “history never repeats itself, but often rhymes,” a quote credited to Mark Twain. When we look back at history, there are some uncanny similarities between today’s environment and the fall of 2013. For a blast from the past, here is some of what was happening eight years ago:

So, that’s a fun walk through memory lane and while certainly not exact, the similarities are fascinating. With all of that happening, the market had to have volatility and experience a big correction, right?

Here is the story in a picture, courtesy of Strategas Research Partners. In 2013 (blue line), the stock market bounced around in September and October, but was up 10.5% in the 4th quarter of 2013 (source: Morningstar). The red line on the chart shows the behavior of the market so far in 2021. 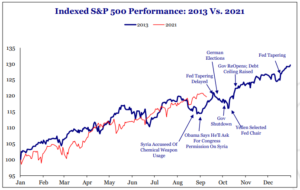 Looking at current events through the eyes of what happened in 2013 is interesting, but can we learn anything else beyond a history lesson? In our office, TJG Portfolio Manager Alex Durbin and I exchange a lot of emails. On Tuesday he sent me an article concerning behavioral finance and pulled out the following quote:

“The potential to improve our results by understanding and managing our behaviour (it was a British article) outstrips any other changes we could make that might enhance our investment fortunes. – Joe Wiggins

While history may not repeat itself, it gives us a lens through which we can test our investment assumptions before we act. In late 2013, it looked like the world was experiencing its fair share of turmoil and it seemed like the best investment behavior was to get more defensive. History shows that would have been the wrong choice.

Today, we’ve had a lot of conversations about the turmoil in the world and whether it means we should get more defensive in the portfolios we have the privilege of managing on behalf of our clients. The lessons from history suggest the best way to manage our investment behavior is to seek to have portfolios which have the ability to succeed based on a range of outcomes in the current environment rather than react emotionally to what “should” happen.