The lagging performance of small cap stocks in an “up” overall market for 2017 is somewhat of a surprise.  After all, small caps were among the best performers in the post-election “Trump rally”  at the end last year and many managers expected the strong performance to continue.  On March 25, noted financial publication Barron’s published an article titled “2017:  Year of the Small Cap Stock.”  According to the article, wealth managers believe that “after years of being overshadowed by large multinational companies, smaller companies will, over the next 12 months, be the beneficiaries of the economic climate and the policies topping President Donald Trump’s agenda.”  (Source:  Barrons.com/articles).  So far, that’s clearly not happening.

With economic data looking strong, why aren’t small caps performing?  We think a big part of the answer is politics, and in particular, doubts over how long it will take, or even if, President Trump will be able to enact some of his proposed policies. 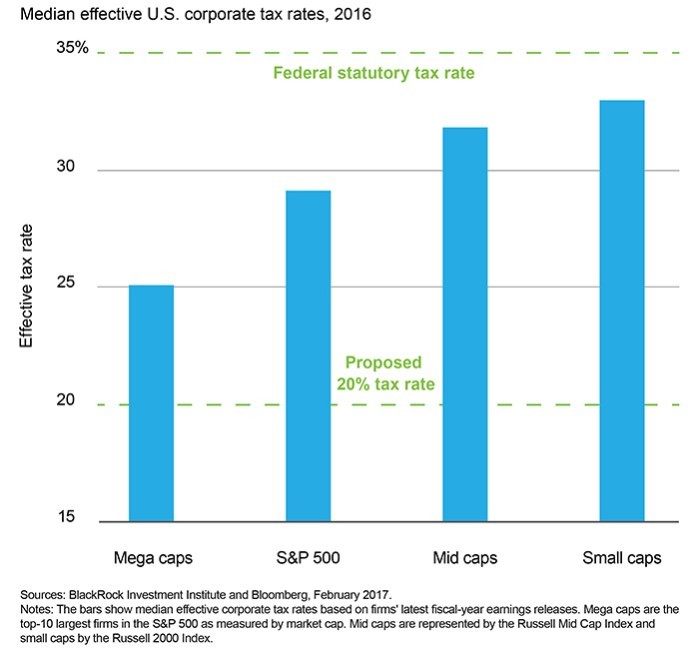 If the Republican proposal to reduce the Federal corporate tax rate to 20% were to go through, all companies would benefit, but small caps would feel the most relief.  Using the chart as a visual, the higher the blue bar, the more relief that area will feel if taxes are cut to the level of the dotted green line.  The tax savings would mean higher earnings, which would make small caps appear cheaper based on valuation measures like price to earnings (P/E) ratios.

We believe one of the reasons small cap stocks are lagging so far in 2017 is that doubt may be setting in about how long, or even if, the Trump Administration and the Republican Congress can get tax reform done.   In other words, will reality match expectations?  If it looks like a tax reform proposal comes to Congress which is likely to pass, we could see a jump in small cap stocks.  However, the longer it takes pass reform, or if compromises are made resulting in smaller than proposed tax cuts, the investment opportunity in small cap stocks will look less attractive.  Politics are clearly having an impact on markets.

Check out this article's companion entitled, Local High School has 100% of its Seniors Accepted to One or More Colleges!.