Earlier this week a member of our investment team, Aaron Filbeck, attended JPMorgan’s two-day Wealth Management Summit in New York City. The Summit was a chance to meet with JPMorgan’s portfolio management teams, dig into investment processes, and discuss the current state of the markets. In addition to hearing from fund managers, Aaron also had the opportunity to attend a presentation and Q&A session with Jamie Dimon, JPMorgan’s Chief Executive Officer.

Dimon’s tone could be described as “cautious optimism” with an emphasis on the resilience of our slow, but steady economic growth. According to Dimon, American consumers are in the best shape in years.  Consumer balance sheets, or the proportion of household assets to debt levels, have not been this strong since the mid 1980’s.  American households may not be spending money as quickly, but aggregate savings has increased and consumers have paid down huge amounts of debt.  As a result, the ratio of debt payments to personal income is at its lowest level in over 35 years (see chart below).  Lower debt payments mean many families should have more disposable income to spend on thing such as entertainment, activities and services.  It also means a higher willingness to utilize credit cards, and potentially take on more debt, which tends to stimulate spending and economic growth. 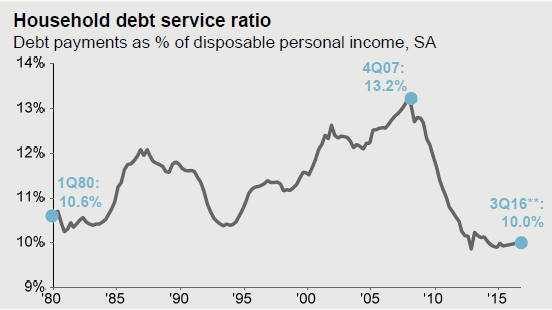 A second area of focus was wage growth.  Unemployment is low and companies are having a more difficult time finding workers to fill positions.  As a result, companies must offer prospective and current employees higher wages to retain them.   The immediate effect of higher wages is pressure on company margins, but increased wages should directly benefit household take-home pay, leading to improved spending habits and providing further stimulation to the economy. Dimon did point out longer term caution that higher wages tend to lead to higher inflation levels, an area that is carefully being watched by the Federal Reserve to justify raising short-term interest rates. As wages continue to increase, inflation pressures will also increase and could lead to rising interest rates.

Dimon also discussed two potential roadbumps to economic growth he is concerned about.  First is the overhang of student loan debt.  According to Dimon, student debt is only 10% of the size of the mortgage market during the Financial Crisis, BUT the debt levels of college students may have implications for spending habits of younger generations, and a potential scenario where higher taxes will be necessary to subsidize some of the burden.

Second was the misuse of monetary policy. With interest rates being as low as they are, it’s not only harmful for bank profitability, but also restricts capital movement between banks, consumers, and businesses due to the low incentive to lend.

The conference did end on a humorous note.   Several people in the audience attempted to convince Mr. Dimon to run for President of the United States. Not surprisingly, he declined the offer.

Check out this article's companion entitled, Life in the Slow Lane.