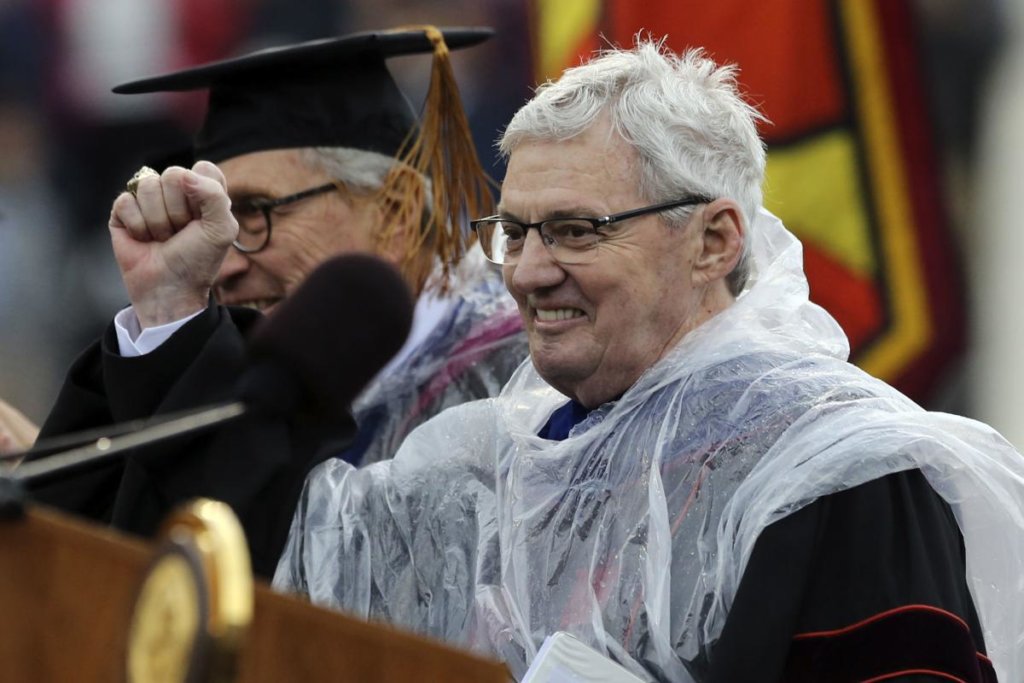 Former head football coach Frank Beamer reacts to receiving a standing ovation after his commencement address in Blacksburg on May 17, 2019. (Source: www.roanoke.com/news)

Persevere through challenges (Frank’s mom) – Frank was burned badly as a young boy and had to have over 30 surgeries in the years that followed.  His mom knew that indulging him with pity would not produce the kind of person she wanted him to become – so she made sure that he did all of his physical therapy and continued to perform well in school and school activities, in spite of his pain, fatigue, and discouragement.  Frank shares that it was through this time that he learned from her the virtue of perseverance – a virtue that has been a tremendous asset to him throughout his life.

Picture Winning (Jim Valvano) – Many of us know Jim’s story – the young basketball coach that took his North Carolina State team to the pinnacle of success (winning the NCAA championship) and then battling cancer with great courage.  Frank shared that Jim would hold a special practice each year in which the only drill done that day was cutting down the basketball nets.  At this practice, he had a ladder set up and taught each of his players how to go up the ladder and cut off their piece of the net – reminding them that they would need to have this skill when they won the championship later that year.  Wow, what a great way to inspire young people to pursue a great goal – have them practice (envision) what it will feel like and be like to actually achieve that goal.  Frank also shared Jim’s famous reminder to spend at least a part of each day laughing, crying and loving.

Gratitude (Charlie Plum) – Frank shared a lesson he learned from Charlie Plum, a navy pilot who was shot down over Vietnam and spent several years as a POW.  When Charlie returned to the states, a former Navy seaman stopped him one day and said, “you’re Charlie Plumb, and I’m the guy that packed your parachute the day you were shot down – I’m glad it worked.”  Charlie realized that he didn’t even know the name of this man – a man that helped save his life on that fateful day – and that he owed him a great debt of gratitude.  Frank encouraged the students to always thank those who have “packed their parachute” in life – parents, siblings, teachers, professors, mentors – and to always maintain a grateful heart.

Great lessons from a great coach.  What life lessons are you and I teaching the young people in our lives by our daily example?  The above are great ones to live and to share.

Congrats to the graduates in your life!!