To inform:  Last week we held our final Portfolios at Panera discussion for 2017 and the main topic on everyone’s mind was the new tax reform bill recently passed by Congress and signed into law by President Trump.  What are the potential market implications of the new tax laws heading into 2018?  Here are some main points from our discussion: 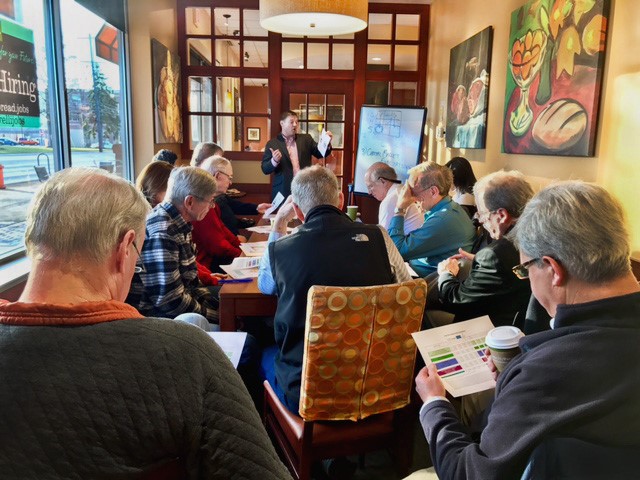 The reduction in the U.S. corporate tax rate from 35% to 21% benefits domestic companies who should be able to translate lower taxes into higher profits.  According to research from Capital Group, the reduction in the corporate tax rate could increase earnings for S&P 500 companies by as much as 10%.  If the estimates prove correct, it has big implications for Price to Earnings (P/E) ratios.

Let’s look at an example of some math to see how this may play out.  The current level of the S&P 500 is about 2680 and the earnings produced by companies in the S&P 500 should come in at roughly $128 for 2017 according to estimates from Strategas Research Partners. Taking the Price (2,680) and dividing it by the Earnings ($128) results in a P/E ratio of 20.9, a number which is high based on historical valuations. Now, let’s say Capital Group’s estimate of a 10% increase in corporate earnings for S&P 500 companies is correct. This would imply earnings would increase by about $13 from $128 to $141. If we apply this new number to today’s price of the S&P 500 we get a P/E ratio of (2,680/ $141=) $19. A P/E of 19x earnings is still at the higher end of the S&P 500’s historical range, but the bottom line is that tax reform has the potential to make the U.S. stocks “cheaper” without stocks declining in price.

2. Small Cap Stocks Should Benefit the Most from Corporate Tax Reform.

The U.S. corporate tax rate is currently 35%, but of course, most companies don’t pay that rate.  Deductions, loopholes, and other tax shelters mean most companies pay a lower “effective rate” than the stated 35%.  In the chart below, J.P. Morgan looks at the effective tax rate for different sized companies.  The largest “mega-cap” companies have the lowest effective tax rate while small caps have the highest.  With the corporate tax rate declining to 21% for all companies, small-cap stocks as a group should have the largest incremental benefit and therefore the biggest “bang for the buck” from tax reform.  Clients of The Joseph Group may notice trade confirmations showing purchases into small-cap stock funds.  The potential benefits from corporate tax reform is a key part of our thesis for making these moves heading into 2018.

3. We are Watching the Bond Market to see if History Repeats Itself from 2003.

The last major tax reform bill passed in the United States happened under President Bush in 2003. Heading into passage of the 2003 Jobs and Growth Tax Reconciliation Act, interest rates on longer-term bonds were declining but rose sharply in the months following passage of the bill. The chart below illustrates behavior of interest rates today compared to 2003. If the bond market reaction proves similar to what happened 14 years ago, it could imply higher long-term interest rates and lower bond prices in the months ahead. 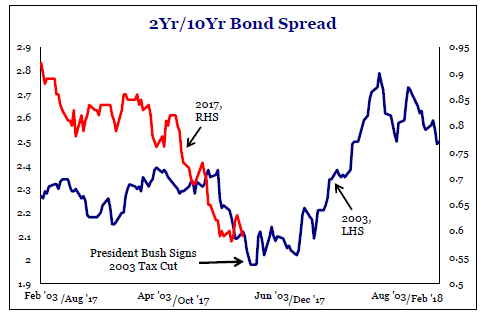 Overall, the passage of the Tax Reform and Jobs Act of 2017 seems positive for stocks as we head into the new year.  As we wrap up 2017, large growth-oriented companies were the clear market leaders over the last 12 months.  However, looking at the impact of tax reform, smaller companies and more “value” oriented sectors such as industrials, telecom, and financials seem to be the biggest beneficiaries.  We are approaching 2018 with the view that conditions continue to be favorable for stocks, but we could see a shift in stock market leadership.

Check out this article's companion entitled, Living a Great Life in 2018.