It’s going to be 18 months until the next sequel in the Star Wars movie saga opens in theaters, but it has only taken 5 months for the sequel to last August’s Chinese currency valuation and global stock market correction to play out across markets.

In the first four trading days of 2016, U.S. stock market indexes have declined approximately -5%, the worst four day start to a year for the Dow and S&P 500 in history, according to FactSet data going back to 1897.  The catalysts for the decline seem like an almost exact replay of last August’s correction – news of slowing economic growth in China, China devaluing their currency, and the Chinese government interfering with free operation of their stock market.  China is once again at the eye of the market hurricane.  Let’s look at each piece to discuss what is happening: 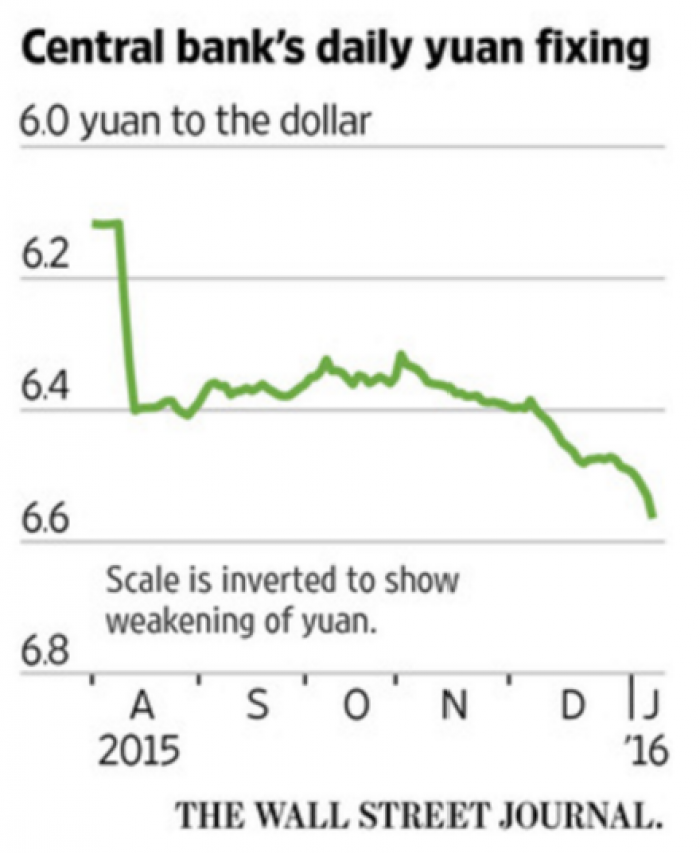 Late Thursday night/Friday morning, not only did China suspend the circuit breaker system, but they also guided the yuan slightly higher, reversing some of the currency’s weakness from earlier in the week.  The impact on markets has been immediate and positive – China’s Shanghai Index closed up 1.98% on Friday and U.S. stock futures indicate the Dow opening higher by over 100 points Friday morning.  In a statement, the PBOC said “it would further liberalize interest rates, make the yuan more international, keep the currency basically stable, and deepen reforms of the currency exchange management system.”

Where do markets go from here?  We think it’s important to recognize what we are NOT talking about – notice there is not a word in the above comments which said anything about corporate earnings or economic growth in the U.S. or Euro zone.  That’s because in the first week of trading in 2016 fundamentals have not mattered.  China devalues their currency and the entire world market goes down…China revalues their currency and the market goes up.  It’s really been that simple.

For perspective, last August’s correction resulted in a top to bottom 12% decline in the S&P 500, before recovering much of that decline in October.  The worst start to a year in U.S. stock market history has caused the market to retrace some of the recovery, and has put the S&P back to where it was in mid-October – U.S. market indexes have NOT set new lows.

Another question – what are we doing in client accounts?  Before the end of 2015, in the largest strategy we manage through Schwab, we added a new fund to the mix designed to be completely uncorrelated to market movements.  In the first week of 2015, the new addition has proven to be a volatility reducer – actually being up on days when the market has been down.  In our investment committee, we are also focused on the fact that the vast majority of U.S. stocks were negative last year with “flat” indexes being propped up by only a few big technology stocks.  We are looking at data which shows the gap between “growth” and “value” stocks is approaching extremes last seen in the March 2000 tech bubble, implying that opportunities may exist in dividend paying, undervalued companies.

One final thought – the news flow coming from China is masking signs of stability and growth elsewhere in the world.  As we look at economic data, European manufacturing activity is accelerating and this morning it was announced that a whopping 292,000 jobs were created in the U.S. in December.  There are clearly signs of strength elsewhere in the world, and that is where we need to be looking for opportunities.

Especially during times of market volatility, we welcome your questions, comments, and dialogue.  We know it is not pleasant when it seems everything is going down, especially when the catalysts are Chinese government policies difficult for us as U.S. investors to understand.  It’s our job to sort it out and keep focused on the goals and objectives of our clients.