Since the election, we’ve used this note to discuss some of the areas that look interesting to us in 2021. First, a couple of key assumptions. One, the Georgia Senate races that both went to Democrats mean it is more likely the Biden administration implements some of their policy ideas beginning this year. 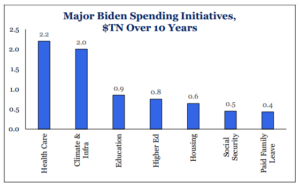 The evenly divided Senate means some of the more aggressive ideas (Green New Deal) are off the table, but things with some bipartisan support (infrastructure deal?) have a meaningful chance of getting done. Another key assumption is that the worst of the COVID lockdowns are behind us, and that we begin to see a return of normalcy in 2021. Should these assumptions be accurate, we think there are opportunities in infrastructure stocks, financials, and energy.

Infrastructure is a broad category comprising physical assets such as toll roads, energy pipelines, airports, renewable energy companies as well as the companies critical to the development of these assets. Strategas, one of our research partners, notes that spending on climate change and infrastructure is targeted to be a couple of trillion dollars over the next 10 years. The tailwinds of government investment and normalizing economic activity could be a major driver of returns not only in the near-term, but in the years ahead. In recognition of this possibility, we began modestly increasing infrastructure exposure in some of our portfolios in the second half of last year.

You can see the curve was flattening (going down) from 2017 all the way to the end of 2019. It began turning in 2020 and has continued its steepening path ever since. Banks have had to navigate the economic effects of COVID, but with government support for weak borrowers ready and waiting, we could be in for a cycle of outperformance from banks and financial companies.

Finally, we can’t help but be interested in the path energy companies could take this year. Oil prices have firmed in the $50 range and have the support of a recently announced reduction in Saudi production. That, along with an expected increase in travel when COVID infections begin to wane, makes for an attractive outlook going forward. This may come as a surprise, but energy stocks have led the market since election day, up nearly 40% since early November. This is a reflection of the depressed prices at which energy companies were trading at during most of 2020, as well as increased confidence in resurgent demand as the world emerges from the worst of the COVID lockdowns.

We’re all hoping for a better 2021. There will be winners and losers this year, and our challenge is to think through the headlines and come to conclusions that will help us identify where some of the winners will be. A key to this is the ability to look at the data and be flexible with our positioning. Infrastructure stocks, banks, and energy companies may not be great late cycle trades and weren’t particularly interesting to us this time last year. If, however, we’re at the beginning of a new, post-COVID cycle they could well be one of the better places to be this year.

This article was written by Alex Durbin, Portfolio Manager

Check out this article's companion entitled, Sticking to Those New Year's Resolutions.