OU Player’s Journey to the NBA 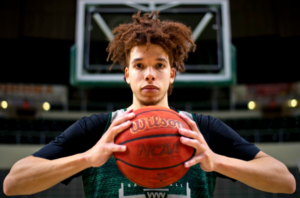 I’m not a basketball fan, hockey is my sport, but a basketball story with Ohio ties that I saw earlier this week moved me enough to make me actually check in on this year’s NBA draft as it was happening.

Jason Preston has been a force on the Ohio University basketball team, but his inspiring story started in Orlando. Raised by a mother who was a Detroit Pistons fan – for reasons he still says he doesn’t understand – he played basketball throughout school. After his mother died of cancer during Jason’s junior year, he continued to play but never believed his career would continue past high school. As a senior he averaged two points per game.

In fact, as a contributor for the Pistons blog PistonPowered, Jason left high school in 2017 having made more of a name for himself in basketball media than for the game.

He enrolled in the University of Central Florida, planning to major in journalism. One weekend, a friend who played AAU basketball needed players and begged Jason to play. Jason impressed in his AAU debut, and ended up playing again the next weekend where he caught the eye of Brad Traina from the coaching staff at Believe Prep, a South Carolina prep school. The coach brought Jason back to Tennessee to join the team.

At the prep school, 18-year-old Jason soon became a standout. Jackie Green Jr., executive director of Believe Prep Academy said, “He just had such a vision for the game. Guys loved playing with him because he would always find them.” Green remembers a coach at Believe buying Jason a new pair of shoes because the unlikeliest member of their school – whose aunt was helping pay his tuition – was playing in worn-out shoes he wore everywhere on and off the court.

While the Believe coaches recognized Jason’s talent, he still had some weaknesses. He requested to play on the C team lower-level squad. He knew he needed to play, and would rather play on the lower team than ride the bench on the A squad.

A Division II offer came midway through his prep career, which was amazing, but not enough for Jason. On the way back from a tournament he clipped his own highlights, then had a friend edit them into a mixtape. The mixtape got notice online, generating two Division I offers, with Jason ultimately committing to Ohio University.

Jeff Boals coached Jason during the guard’s final two years at Ohio. He said, “If you look at his whole life story, all the adversity he’s overcome, who he’s become as a person is just amazing.”

“To come from where he came from – 6 feet tall, only 140 pounds, averaging two points per game as a (high school) senior – to where he is now, it takes a special belief in yourself,” Boals said. “The things he went through at 16 years old, some people don’t go through that in a lifetime. He’s really had to create his own path. It’s a phenomenal story.”

I’m happy to report that Jason was drafted by the Orlando Magic with the 33rd overall pick on Thursday night. He will play for the Los Angeles Clippers, who used a pick acquired – fittingly enough – from the Detroit Pistons to trade for the rights to Jason. He is the first Bobcat drafted since 2003.

Despite a slow start, and the challenges of his childhood, Jason Preston believed in himself. He took the guidance of his coaches and worked to overcome his weaknesses. He left ego aside to play on a lower level team to improve his skills. And through it all remained a good teammate and person. What a great story of talent and perseverance – we can all learn from this amazing young man.

Check out this article's companion entitled, Two Political Events We are Watching.