Two Political Events We are Watching

This weekend, the United States will hit the debt ceiling, the self-imposed limit Congress has set for the United States borrowing money. Hitting the ceiling means the U.S. Government may not borrow any more funds by issuing bonds until the debt limit is increased. An analogy is to think about the credit limit on your credit card. Your credit card may be “maxed out” but if the credit card company agrees to increase your credit limit, then you can keep spending. That’s likely what’s going to happen here, but not without a lot of political wrangling.

Hitting the debt ceiling does not create any immediate emergency. The U.S. Treasury will draw down its cash balances to keep the government funded, so Congress will have until around October or November to take action.

Throughout history and especially in the last 10-15 years, the debt ceiling has been hit and Congress has agreed to raise the limit – this is not anything new. So why are we paying attention? The debate in Congress is not likely to be pretty, and could be tied to other legislation being considered.

Back in 2011, the debate to raise the debt ceiling was politically charged and brinksmanship came down to the 11th hour. The debt ceiling was eventually increased, but until not until after the credit rating on U.S. debt was downgraded by major credit rating agencies and the stock market had a 20% correction. We’re not anticipating the same sort of impact today, and the debt ceiling will ultimately be increased, but the coming dogfight in Congress certainly presents headlines risks in the market. We’ll especially be watching interest rates and the U.S. dollar for clues regarding how the issue may impact stocks and other areas of the financial markets. Ironically, an extended debt ceiling debate may result in lower interest rates and higher government prices as investors may seek out U.S. government debt as a refuge if there is volatility.

This week a Senate negotiators reached agreement on a bipartisan infrastructure package and the Senate produced nearly 70 votes to being debate on the legislation. There is still a long way to go and it will likely take until at least September for a bill to reach the House of Representatives.

The bipartisan agreement calls for an additional $548 billion of spending over five to eight years. The chart below shows areas which are slated to receive funds and include roads, improvements to the electrical grid, electric vehicle charging stations, and internet broadband infrastructure. 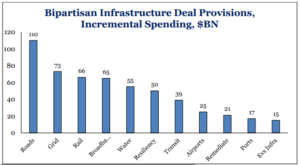 Why is this worth paying attention to? Passage of an infrastructure bill provides a tail wind which could benefit certain areas of the market. Many of the companies which would benefit from road and highway, railroad, and energy grid spending tend to be more industrial and materials sector names and typically found more in “value” style portfolios than “growth” portfolios. In addition, infrastructure as an asset class (think cell towers, pipelines, utilities, toll roads) are a key component of the Real Asset basket The Joseph Group includes in many of asset allocation portfolios we manage for clients. So far this year, infrastructure has trailed the other two components of that basket (commodities and global real estate) but moving forward on the bill could be a tailwind for infrastructure as an asset class in the back half of the year.

Check out this article's companion entitled, OU Player's Journey to the NBA.