Last week’s “To Inform” piece of Wealthnotes was titled “What a Week in the Financial Markets!” and we could say the same thing about this week.  China’s response to President Trump increasing tariffs last week was to allow their currency, the Yuan, to weaken and to ask Chinese state-owned companies to suspend imports of U.S. agricultural products.  It’s clear a trade war is on and the prospects of a trade agreement happening before the 2020 Presidential election are looking more and more remote.

In reaction to the Chinese news, the stock market started the week with a bang and the closely followed Dow Jones Industrial Average (Dow) fell by over 700 points – the worst day for the stock market so far in 2019.  We will see where the market closes on Friday, but investors may be surprised to know the market’s performance for the week heading into Friday is essentially flat.  The market may have had a big drop on Monday, but bounces on Tuesday and Thursday largely offset those losses.  In other words, the activity this week has created a lot of noise but little change in stock indexes overall.

Perhaps the bigger news is what has been happening in the bond market.  Longer-term interest rates (which are controlled by the market, not the Fed) are dropping sharply.   The benchmark 10-year Treasury bond, which had a rate above 2.0% on August 1st, is currently at 1.7%.  Earlier this week, I (Travis) had lunch with a bond strategist at a major investment firm and they believe rates will continue to decline.  According to the strategist, “rates are low across the world and even negative in some countries.  The last time the German Bund traded at these levels was back in July of 2016 and at that time, the U.S. 10 Year Treasury rate hit its all-time record low of 1.37%”

To widen our perspective beyond the noise of this week, below is a chart of the 10-year Treasury bond over the last seven years.  We’ve heard multiple concerns that the drop in interest rates could be a signal of an impending recession.  The last 10 years have marked the longest economic expansion in U.S. history, and over that time, we’ve been here before in terms of interest rates.  Previous declines occurred in 2012 when the headlines were focused in Europe and in 2015 when China (and a weaker Yuan) were the focus. 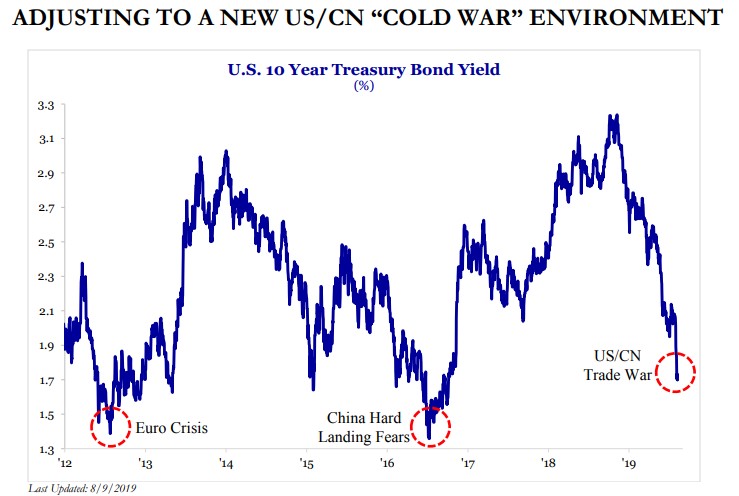 What can we learn from looking at other times when interest rates had sharp declines?  First, it made sense to start thinking about taking profits on bonds, either by selling bonds or swapping to bonds with shorter maturities.  That’s because after rates came down, they also quickly went back up and bond prices move in the opposite direction as rates.  Second, the times where rates dropped were volatile periods for stocks (like now) but also presented buying opportunities.  Interest rates dropped in 2012 and 2016 and with the benefit of hindsight, we know 2013 and 2017 were terrific years for U.S. stock indexes.